Zatanna is the love interest of John Constantine and a member of the Justice League Dark.

Zatanna is the daughter of magician Giovanni Zatara and part of a race of magically-gifted humans known as the homo magi. Zatanna's proficiency with magic has seen her get involved in many adventures with the Justice League, particularly the paranormal ones.

Zatanna is feisty, kind, clever, and honourable. She also showed a sense of humour.

Zatanna appears in the DC Animated Universe, Batman: The Brave and the Bold and the Young Justice series. She has also appeared on Smallville, Justice League Dark, and Justice League Action.

Zatanna in Batman: The Animated Series

Zatanna in The New Batman Adventures

Zatanna in Batman: The Brave and the Bold

Zatanna in Justice League Dark
Add a photo to this gallery

Zatanna and Constantine met while she was dating Nick Necro. The two fell in love and when Zatanna left Nick When Zatanna was kidnapped by Nick and Felix Faust, Constantine went on a crusade to find her, all while the Earth was falling into ruin. To the world-weary Constantine, saving the world is a second priority as he'd rather die than live without Zatanna. Their reunion is short-lived however, as Constantine backs down out of spite towards a demon that helped them stop Felix and Nick. Outraged at Constantine's disregard for an ally because he was a demon, Zatanna and Constantine break up.

On Justice League Dark (2012), Zatana and Jonn Constantine had a history and got back together after defeating Destiny.

Zatanna and Bruce have known each other since their youth. It has been heavily implied that Zatanna has feelings for Bruce, but he keeps her at arms' length along with everyone else he cares about. Their relationship became strained when it was revealed she once erased his memories, but a year later their relationship showed signs of recovery.

Nick was dating Zatanna before she met Constantine. When Nick became obsessed with gaining new magic, Zatanna became distanced from him and fell in love with Constantine. Nick would then spite the two of them whenever he could. His newfound hatred of Zatanna has since reached the point where he allied himself with Felix Faust and the two of them used Zatanna as a power source for a new magic-fuelled machine.

In Young Justice, Zatanna and the original Robin had a flirtatious relationship. They exchanged kisses at various points in the series before starting a serious relationship. At the begining of the series second season (also known as "Young Justice Invasion"), it's revealed that their relationship was over. They remained as friends, which is shown when Nightwing shares with the team a magical​ artifact that Zatanna had gave him as a gift.

They're a couple in Future's End.

In Zatanna mini-series (1985), she meets an afroamerican guy that at first is her "friend", but soon they become a couple. 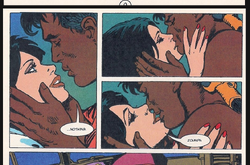 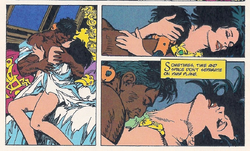 Add a photo to this gallery
Retrieved from "https://loveinterest.fandom.com/wiki/Zatanna_Zatara?oldid=99013"
Community content is available under CC-BY-SA unless otherwise noted.