Wonder Woman is a superhero from DC comics who has her own series as well as being a regular member of the Justice League, she is an Amazon who fights crime with aid from her bullet-proof wristbands, magical-lasso and superhuman-strength, and the ability to fly.

Despite being a main protagonist with her own love interest, Steve Trevor, Wonder Woman has been depicted as having romantic feelings for other men. Most notably is her Justice League colleague, Superman, and to a lesser extent, some attraction to Batman and Aquaman. She has also been briefly involved with civilian, Trevor Barnes, and work colleague, Tom Tresser, aka Nemesis.

More information on Wonder Woman can be found on the Heroes Wiki.

Steve Trevor was the original love interest of Wonder Woman in the comics where he is always the first outsider she meets. In the modern comics, Diana is impressed by his bravery and compassion despite being a human. He is shown to be a dedicated soldier.[1]

In the original comics, she falls in love for him after witnessing his heroism before crashing on Paradise Island. Steve was involved in a love triangle with both Wonder Woman and Diana Prince. He was originally conceived as a male version of the damsel-in-distress trope and being submissive.[2] Their Golden Age counterparts married and had a daughter named Hippolyta Trevor.

She would also fall in love with Steve in the Silver Age but he was killed in 1969. After he was killed while Diana had lost her powers, he was resurrected multiple times: first as Steve Howard, and then as Steven Trevor from an alternate universe whose memory was replaced with that of the original Steve. The two later married with the blessings of her mother Hippolyta.[3]

Post the Crisis on Infinite Earths arc which rebooted the DC Universe, Trevor was turned into a much older man who married Etta Candy and was a friend of Diana rather than a love interest.

During the pre-Crisis comics, he was the first man Wonder Woman ever met. Their relationship has always been a rocky one, but they usually manage to stay on good terms. Steve was originally depicted as a damsel in distress that Wonder Woman would rescue.

In the New 52, again Steve would be the first man Diana saw. Diana was still young when she came to Man's world and she had a lot to learn about relationships between the genders. Steve and Diana would date initially but she ended the relationship. Diana eventually started to date and fall in love with Superman while Steve seemed unable to move on. Following the New 52 Superman's death, Diana would reconcile with Steve, revealing that her feelings for Superman were no longer true and that she had ended her relationship with Steve because she had difficulty grasping the concept of romance.

Upon reconnecting, Steve helped Diana cope with the fact much of her New 52 life was a lie. Ultimately Steve also helps Diana overcome her anxieties regarding romance and their bond becomes stronger. Their relationship however hit a rocky ground with Steve stating that Diana's constant focus was on being a warrior and a superhero, devoting little time to their relationship. The two split up after Aphrodite's death caused love to fade away from the world, though they still cared for each other.

Superman and Wonder Woman have been depicted as possible love interests since late 1960s, since DC started pairing their heroes together.[4] Among the reasons considered for them to be suitable for each other is that they're both from different worlds, they immensely powerful superhuman traits, and they are different from normal people. These factors played a part in developing their romance in the New 52 line. Other factors such as strong friendship, romantic tension, and in some cases, slow aging, and even forgiveness and reconciliation have also played a role. They both promote peace, justice and hope. They however also have problems which include Diana feeling like she has to protect Kal including from himself while also questioning his human life and secret identity.[5] 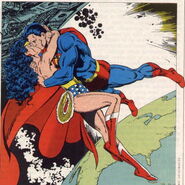 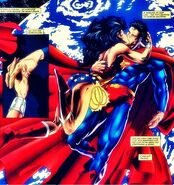 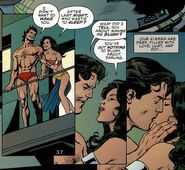 JLA Riddle of the Beast

Injustice Gods Among Us 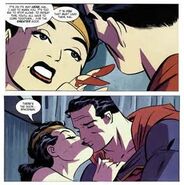 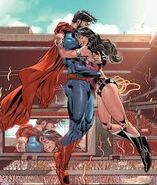 The first time Wonder Woman falls in love with Batman is in The Brave and the Bold #78 where she and Batgirl originally pretended to fight over him in order to fool Copperhead, but ends up falling for real after kissing him.[7] Bruce and Diana expressed interest in each other and also tried to date in some issues of the The Brave and the Bold comics. This was during the time Steve Trevor had died.

In the modern era, Batman was initially indifferent to Wonder Woman who didn't like him because of his crude behavior. The two however came to respect each other in time, with Batman eventually developing a fondness for her, being greatly saddended in Wonder Woman #125 when her soul was incinerated by Nekron. In Legends of the DC Universe #32 Batman told her that despite their differences, they would have to live with who they are and gifted her a rose. Bruce thought of her as one of the most good-natured beings she had known, being inspired by her faith in a world full of peace and compassion. In Wonder Woman #165 she helped him break out of Phobos' control, stating despite his darkness, he always had kindness and compassion deep-down in his heart.

Wonder Woman and Batman had had a brief romance which mostly played on mutual attraction they've had for years. In and out of continuity Batman/Superman/Wonder Woman: Trinity comic series, the two disagreed over each other's methods when they first met and she initially saw him as a brute. But, upon learning of his background and seeing his kind surprises, she came to view him as a complicated man, developing a more positive viewpoint of him. Batman once saw Wonder Woman when she was bathing in the woods and he was so overcome by her beauty and the magic of the island, that he kissed her. This earned him a punch. The comic however reveals in the end that he never forgot the memory and continued fighting for it, this however is contradictory to how they met in the other comics.

The two began a flirtatious relationship while as members of Justice League of America. After he becomes delierious due to time travel, she helps him in recovering and Batman states that he isn't a perfect human which is beautiful just like her, a statement that shocks her. When they are about to die as part of his plan to defeat The League of the Ancients, the two kiss before heading off to their deaths.

In JLA #90, Diana states that while he is a true warrior, he is engulfed by darkness and can be stubborn, rude and ruthless. She uses Martian Manhunter's Transconsciousness Articulator to see a possible future with him. She states to Bruce that while they may have potential of a wonderful relationship, she doesn't want to risk their friendship over it, though the memory of her love for Bruce in the dreams does leave an impression on her mind.

During the Blackest Night arc, Wonder Woman was able to resist the effects of the Black Lantern ring partly by thinking of Batman when the Star Sapphire Ring came near her. This worked because Batman at the time was dead and this was a vision on an island designed by the goddess Aphrodite so she couldn't harm others.

In the DCAU universe's Justice League and Justice League Unlimited, the two become friends and allies as part of the Justice League. In Maid of Honor the two get to know each other well during a dance. They eventually develop a growing fondness for each other. He gets distraught upon thinking she had died in Gorilla City and tries to dig her out. Wonder Woman however survived and kisses him on the cheek upon finding out. She suggests they date in This Little Piggy, but he remains hesitant and gives many reasons why he can't - dating within team is harmful, the two come from different backgrounds and he has a lot of issues, lastly she will be at at risk if she got close to him.

In the Justice League Beyond 2.0 comics, which are a continuation of the DCAU, Wonder Woman is shown falling in love with Lord Batman of the Justice Lords when Justice League visits his homeworld to help them wage war against his former comrades. She stays back on his world unlike the others, and the two eventually marry but he is killed by Lady Wonder Woman. She is overjoyed and emotional to see the Bruce of her universe alive after returning, but is distraught upon learning that he no longer has feelings for her.

In Injustice Gods Among Us, Superman is put into a magical slumber where he dreams of a world where the Joker's evil plot fails in killing Lois. In this dream, Bruce is married to Diana.

In Dark Nights: Metal, Batman and Wonder Woman of an alternate Earth in the Dark Multiverse fall in love while fighting side-by-side by Ares, but he becomes insane after wearing Ares' new war-helmet to kill him. He also ends up killing her when she tries to take it off.

The Batman Who Laughs who has visited multiple universes while admiring Diana's persistence against him, states that he has seen their relationship in various universes, including some where they are lovers with many of their children being fierce whom he personally killed.

In Batman #39-40 of the Rebirth Era, the two grow close to each other while spending years in an alternate dimension called "The Realm" where they fight the Hordes of Gehenna. She admits she finds him attractive and the two lean in for a kiss, but restrain themselves due to comitmment to their partners.

In Superman & Batman: Generations III, Diana marries the immortal Bruce and stays with him for a century, before having to return to look after Paradise Island as its queen.

In All-New Batman: The Brave and the Bold #4, based on Batman: The Brave and the Bold cartoon series, the two fall in love after being shot by Eros. Bruce however breaks out of it and uses her Lasso of Truth to have her do the same. When asked, he states that he's already dedicated to another lady - justice, though it's hinted that it might be Catwoman.

Batman kisses Wonder Woman before dying in the obsidian age

Batman and Wonder Woman in the animated series Justice League.

Lord Batman and Wonder Woman in Justice League Beyond 2.0.

Bruce saddened at Diana's demise
Add a photo to this gallery

Aquaman's interest in her was largely never reciprocated, although she did admire and care for him. In Aquaman Annual #1 Aquaman grew attracted to Diana while he stopped Triton from kidnapping her, telling they probably won't see each other again. He stated he never wanted to kiss someone so much and she replied she understood before he departed. He was later receuited by her into the Justice League of America. In Justice League 80-Page Giant #1, he confessed that he had found her attractive and only stayed in the League because of her.

In the altered timeline of Flashpoint, Wonder Woman entered a political relationship with Aquaman in a similar manner to her relationship with Superman in Red Son. When both Atlanteans and Amazons tried to sabotage the wedding, they turned on each other and started a war that nearly destroyed most of Europe. Over time, the feud only grew more bitter, with Aquaman all but admitting that he never really loved Wonder Woman, which was reinforced as Wonder Woman killed Mera, Aquaman's true love interest.

Retrieved from "https://loveinterest.fandom.com/wiki/Wonder_Woman?oldid=94461"
Community content is available under CC-BY-SA unless otherwise noted.