Willow Danielle Rosenberg is a love interest of Xander Harris, Oz, Tara Maclay, and Kennedy on the show, Buffy the Vampire Slayer also making a guest appearance on its spin-off, Angel, for a couple of episodes. She is portrayed by Alyson Hannigan.

Willow Rosenberg was born to Sheila and Ira Rosenberg in 1982 in Sunnydale, California. She had to deal with her parents being absent in her life and went deep into her schoolwork becoming known as brainy and smart to all her classmates.

Willow had a crush on Xander since childhood and continued well into high school.

Willow was first noticed by Oz in Inca Mummy Girl when she was wearing an eskimo costume but she did not notice Oz watching her. In Halloween Oz watches Willow cross the road and admirers her from his van. They finally meet during What's My Line: Part 1 when they are both recruited for a software company. When Willow is shot at by an assassin who came to kill best friend and vampire slayer, Buffy Summers, Oz pushes her out of the way and takes the bullet for her. Willow went to thank him for saving her life and they struck up a conversation about why the animal cracker monkeys were the only ones to wear pants.

Willow first meets Tara in college at a wicca group as Tara is also a witch. They first become friends helping each other do spells.

Willow released Moloch from his imprisonment in a book by scanning the pages into the library computer. Then Moloch started chatting with Willow online under the alias, Malcolm Black. Moloch was in love with her and wanted her to be with him forever. So he tricked her to meet him and kidnapped her. Buffy and Xander saved Willow from Moloch while Giles and Jenny Calendar trap Moloch back into the book.

When Willow visited Los Angeles in Angel, she flirts with Fred while she's there.

While Willow has a crush on Xander, he has a crush on Buffy. Even though Buffy is Willow's best friend she is shown to be a little jealous of her because she's on the receiving end of Xander's attention and affection.

Xander and Willow founded the We Hate Cordelia Club and when she finds out that Xander has been making out with Cordelia she gets very angry and jealous of Cordelia, but also very sad because she still has a crush on Xander. 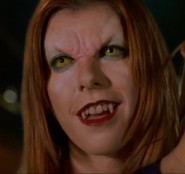 Willow and Oz at Senior Prom

Willow with Xander, Oz and Cordelia

Willow and Spike
Add a photo to this gallery

Retrieved from "https://loveinterest.fandom.com/wiki/Willow_Rosenberg?oldid=44053"
Community content is available under CC-BY-SA unless otherwise noted.