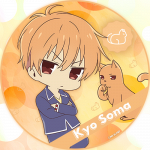 Mayuko Shiraki is one of the supporting characters of the anime and manga series Fruits Basket. She is the love interest of Hatori Sohma.

She is best friends with Kana, Hatori's former fiancée, and through her met Hatori, Shigure, and Ayame two years before the series begins. While Shiraki was attracted to Hatori, she was glad that Kana and Hatori were happy together. She was at a loss when Kana and Hatori broke up, because Hatori had erased Kana's memory of the engagement. Shiraki still has feelings for Hatori, but resents Shigure's continuing interference in her life, even when it brings her closer to Hatori. In the final chapter, Shiraki and Hatori are shown as a couple, with Hatori inviting her on an Okinawa vacation.

In Fruits Basket Another, it's revealed that they have daughter (Kinu Sohma).

She dated Shigure for a month before breaking up, partly because Shigure was distant and partly because she was only dating him to alleviate her loneliness. 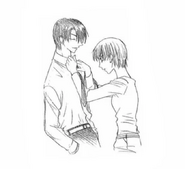 Retrieved from "https://loveinterest.fandom.com/wiki/User:Kitsunes97?oldid=95055"
Community content is available under CC-BY-SA unless otherwise noted.