True Jackson is the main protagonist of the Nickelodeon series, True Jackson, VP. She is the Vice Presidant of the Youth Division and later President of the Mad Style Fashion Company. She is also best friends with Lulu and Ryan and is the main love interest of Jimmy Madigan.

True began working at Mad Style when Max Madigan, Presidant of Mad Style noticed her outside his building selling for charity and soon becoming impressed with her taste and knowledge of fashion hires her to become president of the Youth a Division at the company. Although she was happy and delighted to have her dream job, she soon felt out of place and unwanted due to the other staff members, especially by Amanda Cantwell, the Vice President of Women's Fashion. However, she was soon encouraged by Jimmy Madigan, nephew to Max Madigan, assuring her of her worries.

True soon becomes more confidant, hiring her best friend Lulu to be her assistant and soon showing her true colours and personal touches to the company, making it better and more fun for both herself and other staff members. True soon becomes a well loved coworker and extremely talented fashion designer. She also developes close friendships and bonds with several coworkers, Max Madigan and Oscar and eventually even ending her feud with Amanda, now on more friendlier terms and gaining advice and guidance.

Jimmy Madigan is the mailroom worker at Mad Styles and is True's main love interest. Ever since True began working at Mad Style, she has secretly had romantic feelings towards Jimmy Madigan, nephew to Max Madigan and mail room worker. While Jimmy is oblivious of True's feelings towards him, many people are well aware of her feelings such as Lulu, Ryan, Oscar and even Amanda. However, True is shy when expressing her feelings for Jimmy and is afraid he doesn't feel the same, but still makes the effort to show them and win Jimmy's affections in return such as getting a gig for his band, Fire and Ice, resulting in True and Jimmy sharing their first kiss, surprising both of them. However, Jimmy and True never mention the kiss and instead move on, possibly to nervous to talk about the event. Throughout the series, True continues her attempts to win Jimmy's love and affections. At one point, when True was invited to attend the Last Minute Ball, she discovered Jimmy was also going and learned that he wanted to ask a coworker, but is too nervous. Due to this, True believes that Jimmy returns her feelings and will be taking her. However, True sadly discovered Jimmy actually harboured feelings towards a model named Vivian and took her instead, breaking True's heart, but despite the incident, True still loves Jimmy.

Eventually in the Flirting with Fame special, Jimmy is revealed to harbour romantic feelings towards True. However, similiar to True, he is afraid to admit his feelings as he unsure if she feels the same, but makes the effort as he secretly sent her flowers and gave up an two year internship to stay near True. Eventually, Jimmy and True finally confessed their feelings for each other when True asked Jimmy to the school dance in True Valentine. Later, True and Jimmy attempted to go on their first date together, but discovered they have to keep it secret due to a new office rule where employees are not allowed to date each other. They soon received many obstacles and events that prevented them being together, ultimately spoiling their date altogether leading Jimmy and True to decide to remain friends despite their strong feelings for each other.

Later, True and Jimmy once again had to confront their feelings for each other when Hank, Jimmy's mailroom coworker was retiring and Jimmy began working with a new beautiful girl, Sienna. They soon discovered they had a lot in common, especially their shared love of mail, causing True to become jealous. True realizes it's was a mistake to stay only friends with Jimmy and becomes worried about the growing relationship between him and Sienna, believing they will instantly fall in love with each other.

In the special Flirting with Fame, True developed feelings towards new student, Justin. Their feelings for each other are mutual and True attempts to ask him in a date and while Justin agrees, he quickly changes his mind her refuses. True becomes upset from this and almost believes that he is dating someone else. However, it's later revealed that he is a famous rapper, Lil Shakespeare in disguise as he is attending high school for a proper education. He and True soon start dating, but their relationship is threatened when True learns he will soon be leaving to go on tour. Justin attempts to assure True of his feelings by sharing a private lunch and concert together at school. However before they can even have lunch together, Justin receives a call and has to leave to perform a concert, making True realize that although he cares for her, he puts his career first, leading her to officially end their relationship. 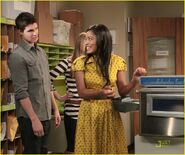 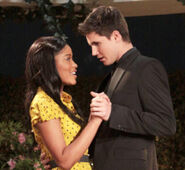 Retrieved from "https://loveinterest.fandom.com/wiki/True_Jackson?oldid=77970"
Community content is available under CC-BY-SA unless otherwise noted.