Terra was a love interest to Beast Boy in the comics and the 2003 animated series. She has the power of terrakinesis, the ability to control stone and earth.

In the comics Terra signs a contract also known as the judas contract to make a deal with deathstroke(slade). She kills most of the titans because of her heart broken by her team

Terra appears in the second season episode Terra.  Seemingly as a in distress girl running from a giant scorpion, the Titans come to try and help her, but it turns out, she was leading the scorpion into a trap.  Using her powers, she causes a stone bridge to collapse and kill the scorpion.  She introduces herself and when Beast Boy becomes shy and becomes a turtle, she says he's hilarious, causing him to blush red.

Terra stays in the tower after being invited.  Beast Boy goes to the couch she was sleeping on with some extra blankets when he notices she was gone.  He finds her outside, throwing rocks in the ocean and joins her.  After skipping a stone, her powers slightly lose control and Beast Boy gets injured comically.  Beast Boy realizes she can't fully control her powers but agrees to keep it secret just between them.

After being offered to do an obstacle course, Beast Boy gives her words of encouragement.  Though she loses control, she beats the obstacle course and Cyborg's record.  Terra hugs Beast Boy and thanks him, making him blush.  After this, Slade makes an attack on a mine.  The Titans explore it and Terra loses sight of Beast Boy after a cave in.  She sees Slade and goes after him.  Slade attacks Terra but offers to help her with her powers.  She loses full control of her powers nearly causing the mine to collapse.  Beast Boy gets to her and is able to calm her down.  Robin realizes Terra can't control her powers and tells her, making her believe Beast Boy betrayed her, when in reality he did not, this causes her to run away from them.

Terra returns to the Titans and is now able to fully control her powers, much to the delight of Beast Boy.  Slade returns and is plotting to create a large underground laser cutter to sink Titans Tower underground.  As Terra goes past Raven, Raven sees horrific visions of Terra, but brushes it aside.  Robin fights Slade but the Laser cuts through the surface causing Titans Tower to sink.  Raven and Terra combine their powers and save the Tower.  Terra is made an official Titan, which becomes the best thing to happen to Beast Boy.  When the team leave Terra in her room, she says they actually trust her.

Now that Terra was an actual Titan, she and the group fight some Slade bots.  Afterwards, Beast Boy makes Terra a gift, a heart-shaped box with a mirror and finally gathers the courage to ask her on a date. She declines, almost fearfully, disappointing Beast Boy.  Later that night, Terra appears at the window and asks Beast Boy out, making him very happy.  Shortly afterwards, the entire Tower is attacked by Slade bots.  On the ferris wheel, Beast Boy asks her what made her change her mind.  She asks him that if he knew something horrible about her, would he forgive her.  He agrees and the two nearly kiss.  However, Slade was in the ferris wheel and Beast Boy fights him off while Terra collapses the ferris wheel.  Beast Boy makes it to the house of mirrors where Slade says Terra betrayed the Titans and only took Beast Boy out to spare him.  Beast Boy becomes enraged and shatters all the mirrors, calling Slade a liar.  Terra confesses that what Slade said was true.  She admits Slade trained her to control her powers and was indebted to him.  Slade then says that Terra was now his new apprentice.  Brokenhearted and angry, Beast Boy says she has no friends.  This causes Terra to become emotionally devastated and side with Slade completely.  At the Tower, the Slade bots are destroyed, but it's revealed Terra also gave Slade the info on each Titan's weakness and data.  Robin asks everyone to give Beast Boy some time.  We last see Beast Boy in dog form, in Terra's room laying by the gift he made her.

Terra, now fully allied with Slade, is given a neuro suit that lets Slade control her powers and improve her abilities. She attacks the Titans who then retreat. Beast Boy asks the Titans to find a way to give her a second chance as he still cared about her. Meanwhile, Slade has Overload, Plasmus, and Cinderblock attack various points in the city.

Cinderblock, Overload, and Plasmus are defeated but Terra attacks the separated Titans and shows them zero mercy and defeats each one, this includes Beast Boy as well. The Titans escape and decide she deserves no more chances at all.

Jump City is now abandoned and run by Slade. Though she says she has no regrets for betraying her friends, she remembers the good times she had with them and now feels more alone than ever.  The Titans return and attack her with no mercy.  Slade tells her to keep fighting and offers his strength to fuse Cinderblock, Plasmus, and Overload into one being.  Terra escapes but, Slade, disgusted with her, smacks her down for running and starts beating her.  Because of this, her conscience, combined with the abuse she received, makes her turn against Slade and she tries to take off her suit.  Because it's wired to her nervous system, it's becomes an impossible feat.  Slade says she now belongs to him and will never make her leave, filling her with despair.  Beast Boy, wanting personal revenge on her for breaking his heart finds her sobbing.  She begs him to kill her, shocking him.  Slade, then takes control of her causing her to unwillingly attack Beast Boy.  Beast Boy tries to tell her to fight back and not let Slade take control of her.  He is knocked down and Terra is forced to make a large spike stone flying above him.

The rest of the Titans arrive and try to talk sense into her.  Realizing they were her real friends, she finally fights back against Slade, ultimately beating the villain into submission.  During the fight, she accidently triggered a volcano, causing Slade to fall in, killing him (Though Trigon would resurrect him partially in Season 4).  While the Teen Titans were getting ready to escape, Terra hugs Beast Boy one more time before she uses all her power to stop the volcano.  Though she is able to stop it, she became petrified as a result.  The Titans make a plaque for her and Raven says they'll look for a way to reverse the effect.

In the final episode, the Titans finally return home after beating the Brotherhood of Evil.  After fighting a mysterious monster that can change its substance, Beast Boy sees a girl that looks like Terra.  While the Titans fight the monster, Beast Boy goes to Terra's memorial and sees her statue gone, leading him to believe the girl was Terra.  He tries everything to get her to remember her past but nothing works.  Beast Boy then fights Slade  and during the fight he says that Terra chooses not to remember and to let her go.  Beast Boy defeats Slade but it was a robot duplicate.  Beast Boy goes to her school but the girl says the girl you know is a memory.  Beast Boy finally lets her go and heads out to help the rest of the Titans deal with the monster, ending the series. 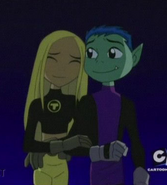 You were the best friend I ever had!

The girl you want me to be is just a memory.
Add a photo to this gallery

Retrieved from "https://loveinterest.fandom.com/wiki/Terra?oldid=97499"
Community content is available under CC-BY-SA unless otherwise noted.