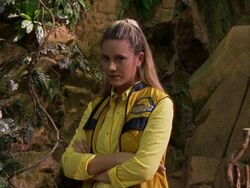 She is also the team's second-in-command.

During the Time Force team up episode, she begins a relationship with Eric, the tortured and mysterious Quantum Ranger.

She first meets Eric after Eric saw her outside his vehicle while she was out for a run. Taylor smiled and winked at him and then ran off. That's when Eric knew he was madly in love with her.

She and Eric formed a healthy and stable love relationship and began dating.

She battled the Mut-Orgs alongside Katie, the Yellow Time Force Ranger.

She and Eric continued to date throughout the series of Wild Force.

Retrieved from "https://loveinterest.fandom.com/wiki/Taylor_Earhardt?oldid=92556"
Community content is available under CC-BY-SA unless otherwise noted.