To keep her planet safe

Starfire aka Koriandr is the love interest of Robin/Nightwing from the comic book and TV Show series, Teen Titans.

Koriandr is super strong, even stronger than Cyborg. All her abilities are powered by positive emotions, for example, her abilitiy to fly is to think of something happy, similar to Peter Pan, and her starbolt energy is powered by righteous fury.

Starfire is a Tamaranean, an alien from the planet Tamaran and the younger princess of the planet and became its official ruler after she defeated her evil older sister, Blackfire. She then gave up her throne to her caretaker and guide, and called Earth her real home.

In the Teen Titans (2003 TV Series), Starfire is an alien princess from the planet Tamaran, who is still a newcomer to Earth and is one of the founding members of the Teen Titans. In the series, Robin and Starfire have romantic feelings for each other, but are too scared to confess their true feelings, despite them being obvious to their teammates and a few enemies. Throughtout the series, despite not having confess their feelings just yet, Robin and Starfire are best friends and Robin helps Starfire to better understand Earth and helps her learn to adjust to living with humans. During the show, it also has one episode from each season that focus's entierly on their relationship, some of which they both came very close to finally confessing their love, but were interrupted.

In the season 5 episode Go!, it reveals the origin of how the Teen Titans were founded, but also focuses on how Robin and Starfire fell in love. In the episode, Starfire and Robin got off to a rather rocky start as Starfire was wrecking the city, while she was really trying to rid herself of the handcuffs that restrained her. Eventually, once Robin calmed her down, he removed them and they two soon shared their first "kiss". However, this "kiss" was to help her to obtain the ability to speak English. By the end of the episode, the Teen Titans were formed after they stop Starfire's captors and Robin and Starfire had developed their strong romantic feelings.

Eventually when the series came to an end, the creators decided to make a series finale film that would bring a true end to the show and had also decided to make Robin and Starfire's romance the centerpiece of the movie. In the film, Robin and Starfire were finally starting to consider on confessing their true feelings for each other. They explored Tokyo together, until they eventually got to the very top of the Tokyo Tower. Starfire and Robin then finally started to talk about how they truly felt and even came close to sharing their first kiss. Sadly, Robin was too focused on their mission to stop the villain, Brushogun and told Starfire that there wasn't anything more between them, basically denying ever having any feelings towards her.

Starfire was deeply saddened by this and had almost reconisdered her feelings for him, but after getting reassurance from a little girl, she had gained confidence in her feelings toward Robin again and realized that he does return her feelings, but is afraid to admit them. They eventually reunited, when Starfire had rescued Robin from the Tokyo Troopers and they went to a secret hideout. Starfire was about to leave to give Robin some privacy, but he had stopped and the both attempted to kiss again, but were interrupted by the arrival of the other Titans. Eventually once the battle had finally come to an end, Robin had admitted to Starfire he was wrong about his earlier remark and had tried to confess his feelings. However, already aware of their mutal feelings for each other and no longer needing an explantion, Starfire told him "Robin.. stop talking" and they at long last finally shared their first true kiss. The series came to an end with Robin and Starfire an official couple.

Starfire, like the rest of the heroes appear in the animated Teen Titans Go! animated series.  Like in the 2003 animated series, Starfire is still trying to get accustomed to Earth and even asked Trigon for the ability to speak like an Earth girl.  In this version, Robin is shown to have a major crush on her, making paper fortune tellers (which made Beast Boy think he was gonna marry her) and go crazy.  This crush makes him lose focus as a hero as he once kidnapped Speedy who asked Starfire out and tried sabotaging the date and also considering building a city pool over a senior center as he wanted to see Starfire in a bikini. In the episode, Staring at the Future, she moved back to her home planet, Tamaran after Night-wing finally stopped obsessing about Starfire and married Batgirl.

However, this incarnation, while friendly, has a very bad temper, and if she gets mad/upset, her friends may suffer her wrath/anger, as seen in the episode La Larva de Amor and The Date where she also showed her bad temper at Robin for ruining her date and reputation. Although she does have feelings for Robin in this incarnation.

Starfire and Dick had a passionate romance during their time in the Teen Titans. The two were almost married, but after having their wedding day ruined, they realised that they weren't meant for each other. In the comic book series called Titans, Dick and Starfire were Investigating in an old woman's house. Dick told Kory if they should get back together. Kory asks him if he truly loves her as in forever love her. Dick is surprised by the question and he says "no". Kory's love for Dick is eternal. Dick has moved on with several women. There are clues that Dick likes her but it's more lust than love.

At the start of the New 52, Starfire is shown teaming up with Jason and Roy in a group called The Outlaws. She has since moved on from Dick and frequently has sexual encounters with her two teammates. Starfire doesn't seem to think much of this, though there are hints that Roy and Jason might care for her as more than a partner but refuse to step over that line. 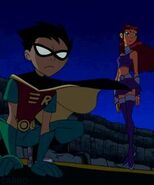 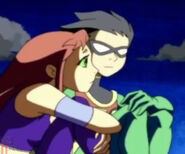 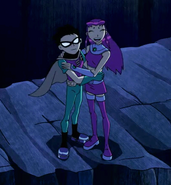 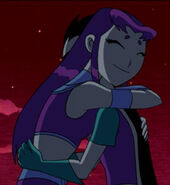 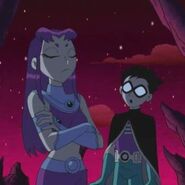 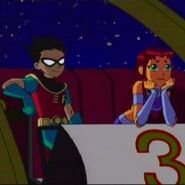 Could you give us a minute? 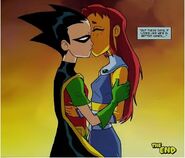 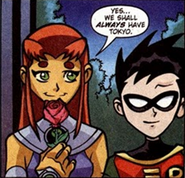 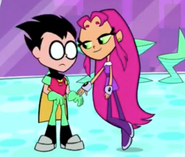 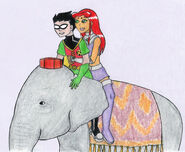 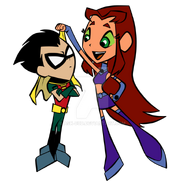 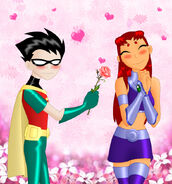 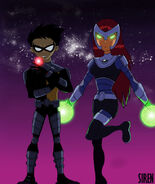 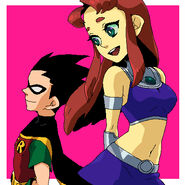 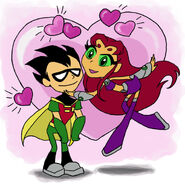 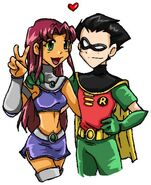 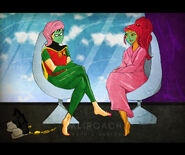 Add a photo to this gallery
Retrieved from "https://loveinterest.fandom.com/wiki/Starfire?oldid=92794"
Community content is available under CC-BY-SA unless otherwise noted.