Start a Wiki
Sonic the Hedgehog is the main protagonist of the video game franchise of the same name and Amy Rose, Princess Elise, Blaze the cat the fourth love interests in the games, and Sally Acorn, and (formally) Fiona Fox and Mina Mongoose's love interests in the Archie Comics. In the games, Sonic has never officially had a love-interest although it has been hinted time to time that he secretly loves Amy, while in the 1992 Shogakukan manga (where she was known as Eimi the Hedgehog, Amy Rose's earliest incarnation) and Sonic X, he loved her. In the Japanese version of Episode 52 the latter, he confesses his love for her which is muted, while in the French version, he fully says I love you.

However, in the Light Mobius series (Archie Comics) Princess Sally Acorn becomes his wife, and they even have two children. The two rule as King and Queen, and are happy with their new family.

He is able to move faster than sound (though it's shown that he can run up to 10 feet at his highest) and can harness the power of the seven Chaos Emeralds to become Super Sonic to defeat enemies capable of destroying the world. His archenemy is Dr. Eggman and his main rivals are Shadow the Hedgehog and Super Mario.

It has been hinted multiple times in the games that Sonic has canon romantic love feelings for Amy and it's been confirmed several times that she loves Sonic. In X it's been canon confirmed he's in love with Amy and has been hinted at in Boom as well. Whereas in Sonic SatAM and the Archie comics his primary love interest, girlfriend and then even wife is Princess Sally Acorn. 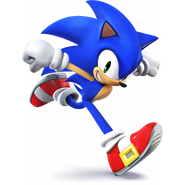 Sonic as he appears in Super Smash Bros. 4

Sonic and his girlfriend Amy in Sonic Boom 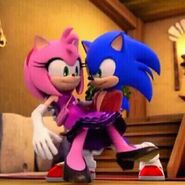 Sonic and Blaze parting ways with a handshake.
Add a photo to this gallery
Retrieved from "https://loveinterest.fandom.com/wiki/Sonic_the_Hedgehog?oldid=94925"
Community content is available under CC-BY-SA unless otherwise noted.