Start a Wiki
Shizuka Minamoto (Was born on october 10)is a main character from the Japanese anime and manga series Doraemon. She is the love interest of Nobita Nobi, the protagonist of the Doraemon series.

Shizuka Minamoto is one of the five main characters in the Doraemon series and the only female among the main characters. She is very kind natured and nice with a love of dolls. She is oblivious to Nobita's feelings for her. Nobita has had a crush on her ever since he first saw her in kindergarten. She is ten years old and a fourth grader (fifth grader in the anime) in her elementary school. She lives in Tokyo, Japan and is an only child. Shizuka enjoys playing the violin but is horrible at it, though she can play the piano really well. She also has a passion for cooking and baking and often invites Nobita over to her house to taste her food. In the end, she gets married to Nobita and has a son, Nobisuke.

It is hinted that Shizuka also develops feelings for Nobita later on in the series when they are older. She thinks of Nobita as her closest friend among her other friends, and grows to care for him later in the series. She sometimes embraces Nobita in a hug, and, rarely, a kiss.

Shizuka as seen in the CGI film Stand By Me Doraemon. 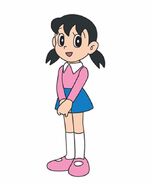 Add a photo to this gallery
Retrieved from "https://loveinterest.fandom.com/wiki/Shizuka_Minamoto?oldid=88649"
Community content is available under CC-BY-SA unless otherwise noted.