Start a Wiki
Robin Scherbatsky is an on-and-off love interest in the US sitcom How I Met Your Mother.

Robin is a a Canadian news anchor. Her career goes up and down over the course of the series as she switches networks. The reasons vary from getting a promotion to downright frustration with her station/co-workers.

Robin is fairly tomboyish, having been raised by her father as a boy. She enjoys scotch, cigars, hockey and guns. She's implied to be afraid of commitment, though she has had several long-term relationships.

Robin met Ted at the start of the series. The two showed an interest in each other from the start, but Ted blew it by saying her loved her on their first date. After that, Robin and Ted stay friends for awhile, but Ted soon falls for her all over again.

In Season 2, Ted and Robin get together, but the relationship doesn't last as Ted wants to settles down while Robin just wants a boyfriend. The two break up. After Ted and Robin begin dating other people, tension begins to surface, but is put to rest after fighting it out and sleeping together.

Ted and Robin would later on start living together, but Robin's bad habits were too much for the both of them and they started working out their differences by sleeping together. This ended after they realised that they were slipping back into boyfriend-girlfriend territory.

Ted and Robin are able to stay friends for awhile, but after Robin's latest breakup in Season 7, Ted realises that he still has feelings for Robin. He confesses his love to her, only to be met with rejection. Things become more tense than ever and the two can't even be friends after this. Marshall tells Robin that her presence is causing Ted a lot of pain and she should move out so he can clear his head. When Marshall and Lily have their baby, Robin and Ted decide to start over as friends.

The rest of the gang still believes that some small part of Ted still loves Robin, but he seemingly gives up for good when he finds out about Barney's plans to marry her. While Barney and Robin make plans for their wedding, Ted's lingering feelings for Robin endure and grow. He tells Lily that he suspect Barney will only break Robin's heart. In the days leading up to the wedding, Robin develops pre-wedding anxiety and confides in Ted instead of Barney. This leads Ted to suspect that he still has a chance with her. Barney finds out and his friendship with Ted becomes strained.

Ted ultimately admits to Robin that for the past 8 years she's been the only woman he's thought about. This confession allows him to let go of Robin long enough to be happy for her getting married to Barney. Barney and Robin's wedding would ultimately lead to Ted meeting his own true love.

After getting divorced from Barney, Robin would lament not making more of an effort to stay with Ted. 6 years after Ted's wife dies, Ted's kids tell him to give Robin one more shot as he's clearly still in love with her. Ted does so and it's implied that they'll finally have the relationship they'd originally wanted with each other.

Barney and Robin have had several moments of chemistry stemming from their similar personalities. After Robin's high-school crush rejected her a second time, she cried on Barney's shoulder. This led to them sleeping together. Barney would soon realise he had feelings for Robin afterwards and tries to woo her.

Barney and Robin started dating during the first part of Season 5. Even though they enjoy being together, neither one is ready for commitment and the relationship begins to eat away at them. They break up when they realise just how bad going steady is going for them. In Season 6 there are hints that the two still have feelings for each other but are too scared to make any moves. In Season 7, Robin admits to Lily that she still has feelings for Barney, and the two dance, and bond more. When Barney and Robin are both dating other people, the two have an affair. They both agree to tell their partner about it, which Barney does, but Robin does not.

In Season 8, Barney and Robin are both once again dating other people. However, once both of them end their failing relationships, they bond more than ever. Barney tells Robin that he's had enough of trying to get with her and just wants to stay friends this time around. Robin feels an absolute need to be with Barney, and decides she needs to sleep with him one more time to get that feeling out of her system. She goes to Barney's house, but finds Barney with one of her coworkers, Patrice. Barney tells her that they are going out, which devastates Robin. However, in The Final Page- Part 2, it is revealed that Barney was not really going out with Patrice, but it was all just a ploy in his playbook to get Robin back (as he also desired to be with Robin). Barney then proposes to Robin, and she accepts. The two set their wedding for May of 2013.

After three years of marriage, Robin begins to spend less and less time with Barney. Robin's constant business travels prove to be too much for Barney to handle. They decide to get a divorce. Watching Barney flirt with girls proves to be too much for Robin and she stops seeing the gang altogether, though she and Barney have managed to make peace by the time Ted gets married.

Robin had several other flings throughout the series. After breaking up with Ted, she started dating an Argentinian bohemian named Gael whom she met while on holidays. The relationship seemed to change Robin into a more peaceful and free-spirited woman, but after a few days she realised this didn't gel with her New Yorker lifestyle and broke up with Gael in order to come back to reality.

Robin's co-worker Don Frank started out boorish and annoying, but would later show a softer side. The two seemed to be getting serious, until Don took a job promotion in Chicago, breaking Robin's heart.

Kevin was Robin's shrink. The two developed a mutual attraction to each other. Kevin even proposes to Robin but when Robin tells him that she can't-and won't-have children, Kevin decides that they're not going to work out and leaves her.

Nick first met Robin while she was dating Ted. Despite the mutual attraction, neither was in a position to make a move. Years later, they would run into each other and begin dating. Robin would later realise that Nick was incredibly stupid and managed to get out of the relationship when Barney "pretended" to proclaim his love for Robin.

After dating both Ted and Barney, Robin has had a negative impact on nearly every woman they've dated since. The main reason is usually that they believe there's some unresolved romantic tension that will rear its head as soon as things become serious. Since Barney later ends up marrying Robin and Ted's love life suffers up until their marriage, it seems like they were right to be concerned.

Ted was persuing Robin shortly before meeting Victoria, at which point he immediately lost interest in Robin. She was distraught at the thought of this, as she'd grown to like Ted as more than a friend. After Victoria left for Germany, Robin invited Ted over to her apartment, believing that they'd broken up and hoping to pick up where they had left off. When she got a phone call from Victoria, Robin realised they hadn't broken up yet and kicked Ted out of her apartment.

Years later, when Ted and Victoria get back together, Victoria shows signs that she doesn't trust Robin. Ultimately, Ted values Robin's friendship too much to leave her for Victoria and the two split.

After breaking up with Robin, Ted begins dating his dermatologist Stella. On the day of their wedding, Robin admits her doubts about this relationship as well as admitting to some lingering feelings for Ted. Ultimately, Stella leaves Ted for her ex-boyfriend, proving Robin right.

When Robin and Barney showed an interest in getting back together, Barney was blindsided by Robin's co-worker Nora. Robin was extremely jealous afterwards but tried her best to be supportive. She later started dating Kevin but slept with Barney in a moment of weakness. Ultimately this helped split Barney break up with Nora. Robin soon followed, but it took a year for her to get back with Barney as he had started seeing Quinn and later Patrice.

When Barney was dating Quinn, he neglected to tell her that Robin was his ex-girlfriend. When Quinn found out, she felt threatened by Robin's prescence and suspects that there might be some lingering feelings. Barney reminds Quinn that Robin is dating someone else and they were much better off as friends.

After Barney and Robin get engaged, Robin sees Barney with Quinn after his bachelor party, attacks her on sight and threatens to break off her engagement. This was later revealed to be a prank concocted by both women to keep Barney loyal to Robin.

Robin has never liked her co-worker Patrice. After Robin broke up with Nick, Barney pretended to date Patrice as a way of making her jealous. When Robin and the rest of the gang stalk Barney, they find out that he's treating Patrice as more than just a one-night stand. Barney conned Ted into telling her that they're getting married. After debating whether she should selfishly interfere with Barney's love life or not, Robin goes after Barney, only to find out that it was all a hoax and Barney was really proposing to her. 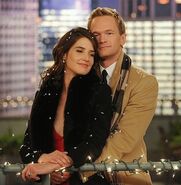 Barney and Robin get engaged.
Add a photo to this gallery
Retrieved from "https://loveinterest.fandom.com/wiki/Robin_Scherbatsky?oldid=65914"
Community content is available under CC-BY-SA unless otherwise noted.