Start a Wiki
Red is a character created by Tex Avery in 1943 who appeared in a number of MGM shorts and some of the new straight-to-DVD Tom and Jerry movies. She is the love interest of the Wolf (who has many nicknames like Wolfie and McWolf) plus Droopy in two of his shorts. She was created by Tex Avery.

She is based off Little Red Riding Hood and appeared in a famous trilogy of shorts. The three shorts are, Red Hot Riding Hood (which is her first short), Swing Shift Cinderella, and Little Rural Riding Hood. In the appearances, (except for Rural Red Riding Hood where it's the Wolf's cousin), Red starts to dance on stage causing the Wolf to go completely nuts and wacky, which inspired many cartoons to this day, as well as a scene from The Mask. The Wolf tries to woo her in all but Rural Red Riding Hood, but she rejects him.

Red has a different name depending on what cartoon short (Or Tom and Jerry film) she is in. She has appeared in Tom and Jerry Meet Sherlock Holmes, Where she is a famous singer being framed for a string of robberies. At the end of the film, Professor Moriarty is arrested for the crimes, clearing her name and she marries the Wolf.

She played Maid Marian in Tom and Jerry: Robin Hood and His Merry Mouse. Here she is the love interest to three Wolves (which act as guards in the film) Robin Hood, and the Sheriff of Nottingham. She is the spy in the castle. When the Sheriff learns this he offers to spare her in exchange to marriage. She tells him she would rather be finished off by the executioner's axe than marry him. The Sheriff leaves the room and tells the three Wolves if she tries to escape, they should kill her. One of the Wolves says "Are you sure? She's the only girl in this whole picture." Marian is able to defeat the guards by using their crush on her to make them turn against each other. At the end of the film, she kisses Robin Hood. 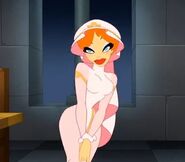 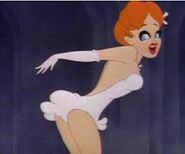 Add a photo to this gallery
Retrieved from "https://loveinterest.fandom.com/wiki/Red_(Tex_Avery)?oldid=82349"
Community content is available under CC-BY-SA unless otherwise noted.