To join the Teen Titans

Combat Able Love Interest
Raven is the love interest of Beast Boy from the Teen Titans , Damian Wayne from DCAMU and Kid Flash in the comics. She is the daughter of Trigon. She grew up in an alternate dimension called Azarath. She eventually joined the Teen Titans where she first met Garfield and eventually Damian. She becomes good friends with Starfire.

Beast boy was primarily in love with the girl Terra in the Animated Series and Raven doesn’t show too much affection towards him, often arguing with him in certain situations, but there were a few possible hints that Raven may have had affection for Beast boy, most notably after he apologizes for calling her creepy. After realizing his true feelings, Raven immediately hugs Beast Boy, and he is seen blushing, with the moment ruined by Cyborg throwing a "stankball" at Beast Boy. When Beast Boy transformed into his incarnate form, "The Beast" to defend Raven against Adonis (and harming her in the process), Raven tells Starfire that he saved her. After the matter, both engage in a somewhat romantic conversation. Beast Boy asks Raven if he could change his name, but Raven says that they’re having a moment and asks Beast Boy not to ruin it. She also expresses jealousy when during the Titans in Tokyo movie when he was being chased by Japanese fan girls. It's incredibly possible that Raven grows to like him, and there were many subtle hints that she has romantic feelings for him.

Unlike the series where Raven’s feelings for Beast boy are debatable, in the TV show, Teen Titans Go it is most clear that Raven likes Beast Boy. The two eventually become a couple.

Raven appeared in this movie. She bonds with Damian Wayne/Robin, seeing they are somewhat similar to one another. They show their fun side around each other in the fair and joke. They also calm each other in dark moments even during the fight with Trigon. Raven even sacrifices herself by turning herself over to prevent demons from harming Damian and in return Damian risks his life to rescue her.

ending of the film when Raven presented Damian with a puppy called Tittus. So its heavily implied that there is a relationship between Raven and Damian.

Damian talks with Constantine and shows his worries about Raven's conditions.

Damian talks to Raven about the decisions they made 2 years ago, Damian wants them to lead the Shadow League together, not because she was a good fighter, but because he has feelings for her, to which Raven says she couldn't go with him Because his father wanted to kill him, both end up holding hands, looking deeply and Damian smiling.

Within this popular run, Raven and Beast Boy have a complicated relationship. They start as very close friends and the comic makes it very apparent that they truly care for each other. Following the One Year Later event, It is shown that most of the Titans have left. This includes BB and Raven. Thus separating the couple. We are later informed that Raven had left because she knew of a traitor in the Teen Titans. Eventually, the Teen Titans discover the traitor and Raven helps them defeat her. Raven tries making things right with Beast Boy who has now joined the Doom Patrol, however, Beast Boy needed more time to warm back up to her again. Raven doesn't rejoin the Teen Titans but instead wishes for a normal life where she goes to High School. This is interrupted when she and a few of the original Titans, including Beast Boy, are attacked. Figuring out that they were attacked by Trigon (Raven's father), they reform temporarily as the Titans (A separate group from the Teen Titans). Raven and Beast Boy become close friends again. Beast Boy asks Raven on a date where she turns him down, thinking it was best for both of them, as she was too dangerous. Although Beast Boy is hurt by this, he still loves and cares for her. Beast Boy then leaves Raven and the Titans to become a mentor with the Teen Titans. Before leaving, he gives Raven some inspiring words and offers her a spot for whenever she's ready. After some time, Raven shows up to the Teen Titans injured, and of in need of help from her eternal soul. Beast Boy gets heavily beaten saving Raven's life, before Beast Boy is killed, Raven wakes up from her sleep to save Beast Boy and defeats her eternal soul. After a few big fights, Raven and Beast Boy decide to talk about their relationship, which ends with a kiss and them becoming a couple again.

Beast Boy hugs Raven when she's in a time of need

Beast Boy offers Raven a room in the tower, then they hug 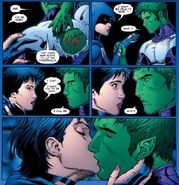 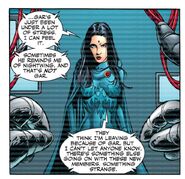 Raven denies Beast Boy because she's worried about his safety

Beast Boy watches over Raven as she sleeps 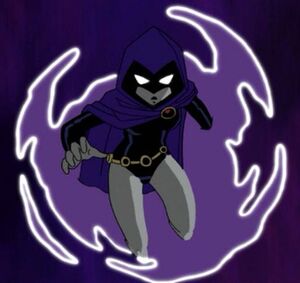 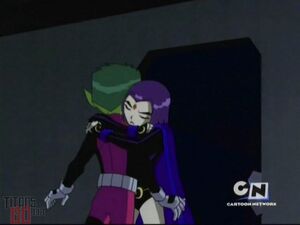 Raven hugging Beast Boy.
Add a photo to this gallery

Raven shown as happy with her hood off. 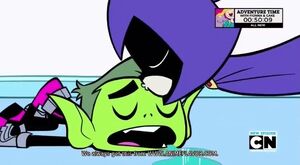 Raven kissing Beast Boy on the forehead to return her feelings to him. 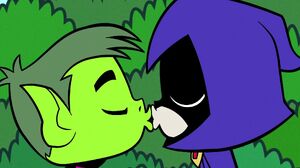 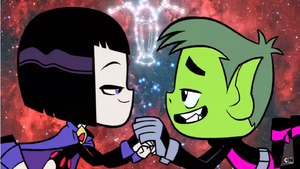 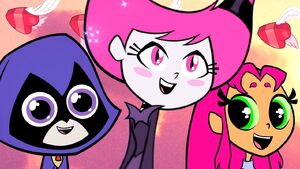 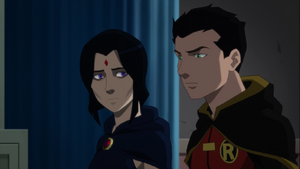 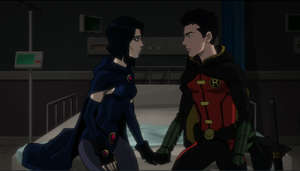 Damian Wayne declares his feelings to Raven.
Add a photo to this gallery
Retrieved from "https://loveinterest.fandom.com/wiki/Raven?oldid=101242"
Community content is available under CC-BY-SA unless otherwise noted.