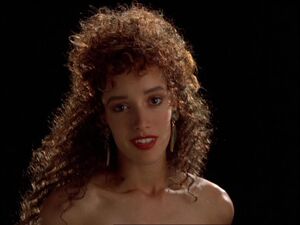 Rachel is the love interest of Peter Loew in Vampire's Kiss. She was played by Jennifer Beals.

Very little can be said about Rachel, as she is only seen by Peter and their interactions are clearly imaginary.

Peter meets the real Rachel in a bar and tries to charm her. The scene immediately cuts to the two having sex and Rachel bites Peter's neck with her abnormally sharp teeth. The next morning, Peter cuts himself shaving in the same spot he was bitten, before making coffee and breakfast for someone who just isn't there, casting ambiguity on the previous night.

When Peter goes on a date with another woman, he gets drowsy and rushes home, not knowing why he feels so fatigued during the daytime. He tries to get back in touch with his date, but Rachel compels him to stay at home and make love to her.

Rachel haunts Peter's apartment, leaving him drained and delusional. He eventually loses so much of his sanity that he rapes his secretary, believing her to be Rachel.

Peter is convinced that he's become a vampire and starts acting like one, sleeping during the day, covering his windows to avoid the sun and murdering a young woman by biting her neck with a set of false fangs. Rachel finds Peter and mocks his attempt to be a vampire, as his efforts are too clumsy. Rachel then leaves Peter for another man. When Peter goes after her, he finds the real Rachel at a night club and tries to prize her mouth open to show everyone her fangs. Rachel's boyfriend attacks Peter and he's kicked out.

When Peter is killed by the brother of his rape victim, his last thoughts are of Rachel calling out to him.

Retrieved from "https://loveinterest.fandom.com/wiki/Rachel_(Vampire%27s_Kiss)?oldid=43982"
Community content is available under CC-BY-SA unless otherwise noted.