Start a Wiki
Princess Daisy is the love interest of Luigi and She is also regally and unbearably beautiful tomboy Princess of Sarasaland.

She first appeared in Super Mario Land for the Game Boy in 1989. She appeared as Luigi's Caddy in NES Open Tournament Golf for the NES in 1991. She was a forgotten and neglected Mario character until Mario Tennis for the Nintendo 64 as a playable character, along with Birdo, and Waluigi which it was his first appearance. She and Waluigi also joined the Mario Party crew in Mario Party 3 for the Nintendo 64 which it was the last Mario game to feature her in her classic yellow and white dress with her tan skin, long brown hair, and reddish-pink crown. She becomes Princess Peach's partner in Mario Kart Double Dash for the Nintendo Gamecube, and the Mario Baseball series. She is also Luigi's partner in Mario Tennis for the Nintendo 64. In Mario Power Tennis, Daisy calls Luigi, "Sweetie" when she was about to get the trophy in the cutscene. In the Mario Party series, she and Luigi were called the "Steady Sweeties". She appeared in Mario Kart Double Dash as a default character, and Mario Kart DS, Mario Kart Wii, and Mario Kart 7 as an unlockable character and Mario Kart 8 as a default character again. In the intro of Mario Party: Island Tour, she is seen walking with Luigi and talking with him, which shows that she has feelings for Luigi. The information for Daisy's trophy in Super Smash Bros. Melee says that she is Luigi's lover. Daisy also appeared in Mario spin-off games since NES Open Tournament Golf in 1991. She also appeared in the 1993 live-action Super Mario Bros. Movie where she is played by Samantha Mathis, and she developed a relationship with Luigi. 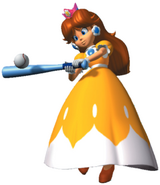 Daisy as she appears in the Nintendo 64 era

Daisy in her sports outfit 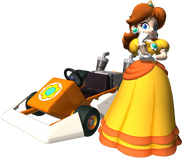 Daisy as she appears in the Mario Kart series

Daisy as she appears in the Mario Strikers series 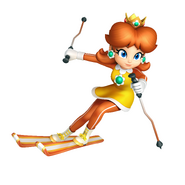 Daisy in her winter outfit

Daisy as she appears in the Nintendo Comics System series 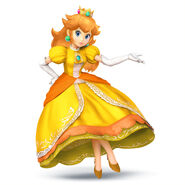 Peach with Daisy's palette in Super Smash Bros. 4 as a reference to Daisy

A statue of Daisy with Luigi doing a romantic dance 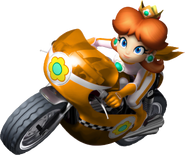 Daisy in her bike suit 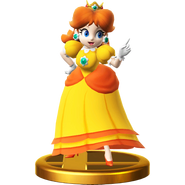 Daisy in Super Mario Run
Add a photo to this gallery
Retrieved from "https://loveinterest.fandom.com/wiki/Princess_Daisy?oldid=91553"
Community content is available under CC-BY-SA unless otherwise noted.