Prince Naveen is the deuteragonist from Disney's 2009 feature film The Princess and the Frog. He is the prince of Maldonia. He is an outgoing, smooth-talking, and fun-loving prince who comes to the French Quarter for the Jazz scene and with whom Tiana and Charlotte fall in love, in which is accompanied by his valet Lawrence. Due to being new in the city, he is persuaded by the shady Dr. Facilier into taking a tour of his office, which results in a curse transforming him into a frog. He is voiced by Bruno Campos. During the movie, he oftens makes exclamations in his native language of Maldonian, which is descended from Italian. Though, it should be noted that his voice actor, Bruno Campos, is Brazilian-born.

“At this point, you only have two choices. Woo and marry a rich young lady, or...Get a job!”
―Lawrence to Naveen

As mentioned above, Prince Naveen is native to the kingdom of Maldonia, where he lives alongside his parents, the king and queen, and his younger brother, Prince Ralphie. Naveen is quite the freeloader, and has spent all his life being waited on, never learning to do a thing for himself, including activities as basic as simple cooking. His parents didn't seem to mind, and were apparently too busy running the kingdom to have time with their son, as Naveen stared during his meeting with Tiana that his mother had servants read him stories before bed every night, implying she was never available to do so. By the time of adulthood, the King and Queen of Maldonia finally had enough of the prince's lazy antics and excessive partying, so they cut him off from the family wealth, forcing him to either get a job, or marry a rich young woman.

Of course, his laziness was what ultimately fueled his decision to marry back into wealth, but upon meeting Tiana, he slowly begins to realize the selfish ways he's been living, and comes to understand hard work will eventually pay off.

Prince Naveen is a fun loving and lazy, yet educated philanderer. He loves dancing, playing music, and most of all, women. Although he has a lot of innocent charm to him, the the prince's life was spent spoiled, having servants wait on him hand and foot, day after day for years upon years. This, of course, makes him out to be a egotistical and lazy adult, who's only goal is to "live life to the fullest" via partying every night with beautiful women of all kind. Though not with malice, Naveen didn't seem to treat his servants very well, either, specifically his valiant, Lawrence, who's constant lack of appreciation turns him to villainy. Whilst the prince was a heavy philanderer, he did seem to have a huge romantic side to him. One that was apparently never used at full force before meeting and falling in love with Tiana for the first time.

Naveen is also one of the first Disney princes to have a heavily vain personality, constantly commenting on how gorgeous and wonderful he finds himself, much to the annoyance of Tiana and Lawrence. Still, underneath the vanity, Naveen isn't as confident as he likes to believe, ultimately confessing to Tiana his disappointment in not knowing how to do anything at all, as a result of being served all his life.

Naveen's supervising animator was Randy Haycock, who had previously animated characters such as Simba and Pocahontas, in both his human and frog form. Naveen is a lean and fairly well built, average sized young man with dark brown hair and amber eyes. He has a slightly lighter skin tone than Tiana and often seen wearing commoner clothes over prince-like clothing. By appearance, he resembles his voice actor Bruno Campos, who, as mentioned above, is Brazilian born, giving Naveen a Brazilian-esque appearance.

When first introduced, Naveen is seen wearing a dark cream vest with a white shirt, accompanied by a reddish, orange ascot, fitting into the style of traditional New Orleans of the 1920s. At the end of the film, however, Naveen is featured in a fresh, new formal attire, with heavy and light shades of green, matching Tiana's official princess gown. The princely attire is also featured with a cape, going down just below Naveen's waist.

As a frog, Naveen was larger than Tiana, with a darker tone. He was originally designed as rather realaistic, resembling a toad, but the animators felt the design was too unappealing and reworked the appearances to be cuter, much like Jiminy Cricket's design process in Pinocchio.

Role in The Princess and the Frog

In the film, Naveen is a prince from the kingdom of Maldonia who is visiting New Orleans for Mardi Gras. It is revealed that due to his lazy ways, Naveen's family has cut him off from his fortune. Thus, he intends marry a wealthy southern belle to gain money, and he sets his sights on Charlotte La Bouff. Naveen, who is accompanied by his valet, Lawrence, meets a voodoo witch doctor named Dr. Facilier, who promises both men their dreams. Naveen doesn't really want to be tied down in marriage - he wants money and freedom. Faciler looks into Naveen's future and promises Naveen green. To Naveen, green refers to money. After making a deal with Facilier, Naveen was turned into a frog to 'hop from place to place', gaining him his 'green' and his freedom from responsibility, and Lawrence took his place. At Charlotte's masquerade ball, Lawrence, in his Naveen disguise, begins to woo the young maiden, whilst Naveen remains trapped within a jar, hidden inside Lawrence's guest house.

The Kiss of Fate

After escaping from Lawrence's custody, Naveen later came across Tiana, who he thought was a princess, and asks her for help. Naveen attempts to follow the story of the Frog Prince. Naveen believes a kiss from a princess will break the spell, and so he asks Tiana to kiss him. While Naveen is correct in how the curse is broken, Tiana is not a princess and so the spell backfires. Due to the mixup, Tiana is turned into a frog. Naveen and Tiana are chased by Charlote's dog, Stella, and the pair ends up in the Bayou. Naveen is confused on why the kiss did not turn him human. Tiana tells him that she is not a princess but a waitress. When he discovers that Tiana is not a princess he is angered because he thought she was a "beautiful princess not a waitress." He makes a deal with her. After he marries Charlotte, the couple will purchase the mill that Tiana wants to convert to a restaurant. In return, Tiana will assist Naveen in leaving the Bayou.

The Bayous of New Orleans

While in the bayou, they meet an alligator named Louis. Louis takes Naveen and Tiana to a kind voodoo fairy godmother Mama Odie, who can help them become human again. Naveen and Tiana also meet Ray the firefly, who tells them the story of his love Evangeline. Naveen is soon captured by Frog Hunters but is saved by Ray. Afterwards, Naveen saves Tiana from the hunters. Naveen along with Tiana, Louis, and Ray settle down. While resting, Ray introduces the friends to Evangeline who turns out to be a star. Ray sings a song about his love. During the song, Naveen begins to fall in love with Tiana. Naveen is then captured by shadow demons sent by Doctor Facilier. Thankfully, the demons are destroyed by Mama Odie.

Mama Odie convinces Naveen that all he needs in life is love. And that love would come from Tiana. Mama Odie then tells the friends that Naveen must indeed kiss a princess to break the spell, and the only available princess is the princess of Mardi Gras, Charlotte La Bouff. Seeing that her father is king of Mardi Gras, Charlotte is Princess of Mardi Gras, and thus can break the spell as long as the festival is running. During the trip home, Naveen attempts to propose to Tiana, believing that he could work jobs in her restaurant. He discovers that if Tiana cannot buy the mill the next day, her dream of owning a restaurant will be impossible. Naveen decides against proposing, so that Tiana will be able to have the restaurant.

The Battle and Finale

Naveen is then captured by Lawrence, as is blood is needed for a charm to turn Lawrence into Naveen, as part of Facilier's plot. Ray is able to rescue Naveen, and Naveen gives the amulet that Facilier is using to Ray. After Lawrence is arrested when Charlotte discovers him, Naveen tries to kiss Charlotte, but before he can, Tiana arrives and confesses her feelings for Naveen. She had come to the discovery while facing Facilier. Charlotte tries to help by kissing, so that they can be together, but it is too late. Tiana and Naveen decide to remain as frogs, and they witness Ray's death. Naveen, along with Tiana and Louis, attends Ray's funeral and celebrates Ray's new life as a star. Naveen marries Tiana in a small ceremony officiated by Mama Odie. When the couple kiss, they become human. Mama Odie reveals that this is because Tiana became a princess when she married Naveen, who is a prince.

Together, Naveen and Tiana buy the restaurant and celebrate its opening at a gala. Naveen starts working at the restaurant as head waiter and entertainer, proving to his wealthy parents that he is more than a lazy, good-for-nothing leech. They also become frequent customers at the restaurant. 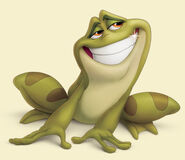 Tiana and Naveen happily married and restored to normal.

Community content is available under CC-BY-SA unless otherwise noted.
Advertisement