Start a Wiki
​Olivia Lawrence is a protagonist in the 1984-85 anime TV series Video Senshi Laserion. She is the classmate, best friend and love interest of the main character and hero, Takashi Katori.

Olivia was born in the United States but had been living in Japan as an expatriate for a number of years. Her father, Steve Lawrence, was working on the Moon at the time. She became acquainted with Japanese classmate Takashi Katori and his family during their middle school days. Both were members of the Kendo club and liked online games based on virtual reality (a futuristic concept at the time of the anime’s release) and she enjoyed watching him play and program games on the computer.

Takashi, despite being a slacker for most school subjects, was a talented computer programmer who devised a robot he called “Laserion” to fight against other virtual robots. One day he sends it via satellite to their friend David Carlsen in New York City at the same time an experimental teleportation transmission is beaming a passenger jet in the opposite direction. As a result of an attack on a satellite retransmitter being used, the jet is instead transmitted as virtual data to David’s computer, while Laserion materializes in the teleporting device in Japan as a real robot.

Takashi and Olivia were eventually tracked down and arrested by the Earth Confederation government, but then the Confederation finds out that the party responsible for the failure of the teleportation experiment was a group on the Moon called the Rebel Army led by former EC scientist Godheid, and that they are sending in robots to attack Earth. Called upon to help the EC robots G1 and G2 combating the RA robots, Takashi takes command of his materialized robot and is able to beat back the enemies, destroying many of them. Though initially hesitant to work for the Confederation, Olivia and David remind Takashi that by battling the Rebel Army robots he's painted a big target on his and Laserion's back.

As Takashi assumes his role as pilot of Laserion and the best warrior in the Earth Confederation, Olivia is there to egg him on and inspire him to do his best, all the while she prayerfully waits for him to return safe and in one piece from battling the bad guys. Meanwhile, Olivia's father Steve, who has been taken prisoner by the Rebel Army along with several civilian workers on the Moon, misses his daughter, and vice versa.

As the Rebel Army allies with and is eventually replaced by the aliens of the Jack Empire, which has conquered many worlds and now sets its sight on Earth, these aliens realize the value of Olivia as a means of getting back at Takashi after he leads Laserion to several victories over them. They do capture her while she goes to help out poor people in Africa (leaving Takashi alone temporarily while he is regrouping to fight against the new threat and particularly the Jack Empire's champion, Gario, who pilots his own robot Gario Savang as a counter to Laserion), and lock her in a cell in a mobile pyramid fortress, first on Earth and then flying off toward the Moon.

Gario, however, recognizes that Olivia is very important to Takashi and allows her to be rescued by him, killing Jack grunts who were leading her to execution. He explains coldly that he did it so Takashi wouldn't be distracted and fight Gario on equal terms. While leading Olivia to the top of the fortress so Takashi can summon Laserion's plane transformation and get away from the Moon, they kiss for the first time, signaling that their bond is now permanent. Takashi takes Olivia home to Earth and then returns to battle Gario, and defeats him while the G robots finally execute the Jack leadership and free Earth of the threat.

The fate of Takashi and Olivia’s love after the final battle with the Jacks is left unknown. Since they are both teenagers and still in school, and she is ethnically a foreigner in Japan, their fate is left to the viewer.

Olivia is beautiful, intelligent and kind. She is self-respecting and pure, and doesn’t like being taken for a mere object of desire by any boy, including Takashi himself. When it comes to inspiring him to do his best, both when battling enemies and in everyday life challenges, she nurtures his spirit by being herself and giving him inspiring advice. While she is away in Africa and then kidnapped by the Jacks, Takashi just has to think of her to keep a fight going when Laserion is down for the count.

As a Westerner, she is shown to have a strong faith in the Christian God, whether going to an actual church building or simply praying, both for her father to be safe and for Takashi to be successful fighting (and even not fighting) the enemies. She is also a selfless person, as she loves to help others; she goes to Africa explicitly to help out poor people in a makeshift hospital. She also is able to communicate with the alien Elephan, whose UFO had been taken down by Laserion mistaking him for an enemy, and was able to determine that he disliked the Jack Empire and that they were a serious threat to the Earth.

Olivia’s crucial weakness, however, is her love for her absent father and wish to see him, which often leads her into traps made by the enemies and which hurt her emotionally, and physically as well. Understandable since she’s still a teenager and as a means of preventing her and Takashi from getting too close for comfort, these situations ultimately make Takashi prove himself as selflessly caring for her and their relationship.

Whereas her appearance and many of her behaviors would seem like 1980s Hollywood fantasy clichés (and Japanese derivatives of them), Olivia is a rare (in the era) attempt to make a Western love interest for a Japanese hero. 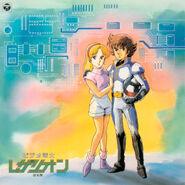 Soundtrack vinyl record cover
Olivia at Takashi's side
Add a photo to this gallery
Retrieved from "https://loveinterest.fandom.com/wiki/Olivia_Lawrence?oldid=81822"
Community content is available under CC-BY-SA unless otherwise noted.