Numbuh 3, a.k.a Kuki Sanban, is the love interest of Numbuh 4 a.k.a Wallabee "Wally" Beetles in the animated series Codename: Kids Next Door.

She is a happy-go-lucky, 10-year-old Japanese-American girl who is in charge of Diversionary Tactics and is the Medical Specialist of Sector V. She is the youngest operative, and one of the two female members in her sector.

Throughout the series, it was obvious that Numbuh 3 has a crush on Numbuh 4, but is too shy and stubborn to admit her feelings. Kuki and Wally have extremely different attributes, with Kuki loving Rainbow Monkeys and being a girly-girl while Wally likes all things gross, violent, and hates Rainbow Monkeys. Kuki tends to hug Wally when something flatters her, making Wally blush and shy. It's also worth noting that among Sector V, Wally and Kuki are the only members that regularly speak to each other using their real names rather than their codenames. In Operation L.O.V.E., when Numbuh 4 ruined the school play, he tried to tell Kuki that he loved her, but asked, "What are my parents doing here?". After the play, he offered to sing with Kuki the last song in which she couldn't sing due to him ruining it. Also, in Operation: I.N.T.E.R.V.I.E.W.S. it is revealed that when they grow up, she marries Numbuh 4. There are a number of other occasions when Numbuh 4 appears to attempt to confess his feelings for Numbuh 3, Operation U.N.D.E.R.C.O.V.E.R. and Operation H.O.S.P.I.T.A.L.

In general, Numbuh 1 seems to view Numbuh 3 as a very close friend. It could even be said he treats her like a little sister. Apparently, they both met at a young age. He occasionally, but notably, refers to her her as "Kuki," more than the other members. It was hinted by Numbuh 5 at the end of Operation: W.H.I.T.E.H.O.U.S.E. that Numbuh 1 may have/had a bit of a crush on Numbuh 3. This came about when Numbuh 5 was asking Numbuh 1 questions to prove that he actually was Numbuh 1, and she asked;

Nigel responded to this by narrowing his eyes, possibly suggesting that it was him. This is unconfirmed, and it is not known if Numbuh 3 ever returned his feelings if he had them.

In Operation: B.E.A.C.H, Numbuh 3 was captured by a knight of King Sandy and forced to become his queen. Numbuh 4 When he found them, he entered the sand castle along with Numbuhs 2 and 5 and faced King Sandy, but the castle was destroyed when the tide rose. When they left the sand castle Numbuh 3 said he believed that King Sandy was cute. In Operation: K.A.S.T.L.E, King Sandy returned to try to make her his wife again, but then fell in love with the younger sister of Number 3, Mushi.

The Kid usually flirts with Numbuh 3, which makes Numbuh 4 jealous. 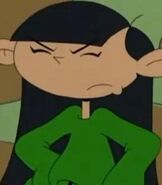 Retrieved from "https://loveinterest.fandom.com/wiki/Numbuh_3?oldid=90991"
Community content is available under CC-BY-SA unless otherwise noted.