To confess his love for Rina (succeeded)

Masahiro Hamasaki is recurring character introduced in the second season of the anime and manga series, Mermaid Melody. He is also the main love interest of Rina Toin.

Masahiro is very confident and straight forward about his choices and words. A good example is when he expresses his refusal of taking over his family's company and instead enjoys amateur boxing and motorcycling instead, showing somewhat of a rebellious side. Masahiro is also shown to be kind, caring and patient as shown when he and Rina first met. However, Masahiro can be secretive sometimes as he didn't reveal to Rina details about himself such as he reasons for boxing, motorcycling or of his family. He is also shown to be flirtatious as he constantly flirts with Rina whenever they are together. Masahiro is also shown to be respectable, understanding and wise as he sometimes advises Rina whenever she has a problem and always tries to comfort her.

Masahiro has dark green spiky hair and eyes and he also wears glasses. His usual outfit consists of a brown jacket and dark jeans. For school, he wears the assumed-to-be elite male uniform. He carries his school bag in the same mannerism Rina does.

Masahiro originally first saw Rina near the beach as she was crying while reading a letter sent from her home kingdom, wishing for her return. Masahiro started to become worried about her, but didn't get the chance to talk to her as Rina became aware of his presence and left. Masahiro and Rina later met each other again when they were on their way to their respective high schools. Masahiro and Rina shared a brief moment where Masahiro expressed his relief that Rina was alright after seeing her upset from the day before. However, before Rina could respond, Masahiro had already left and so they didn't get the chance to properly introduce themselves. Masahiro and Rina had once again met each other as Masahiro was on his way back from school and noticed Rina again near the river. He started to become worried when he noticed she was upset again and became more distressed as noticed Rina heading towards the river.

Becoming more worried and believing the worst possible scenario, Masahiro ran towards Rina and pushed her away from the river. They briefly became unconscious, but once they woke up, Rina revealed Masahiro was mistaken, revealing she was going for a "walk", while actually attempting to transform into her mermaid form. However, before they could properly speak or introduce themselves, Masahiro had instead gathered their things together and left. Later, Masahiro and Rina met each other the next day in town as Masahiro was busy training. Masahiro revealed he accidentaly took one of her books and called Rina by her name for the first time. They later met near the river again as Masahiro returned her book and Rina began to reveal her problems that she has decided to return home, but is worried about upsetting Lucia and Hanon.

Masahiro advised Rina that she should be honest with them, stating that if they really are her friends than they will understand, but also admits he is sad to say goodbye to her as they have only just met. However, they are suddenly interrupted as people nearby claim they have spotted a whale, believing it to be her whale friend, Minke, Rina leaves Masahiro. Later, Rina and Masahiro reunite as Masahiro offers Rina a ride to the harbour on his motorcycle. However, during the ride, Rina started to become upset and Masahiro briefly stopped and questioned if she really wanted to back home. Upon arriving at the habour, Rina had instead decided to remain with Lucia and Hanon and gave a Minke a four leaf clover as a sign that she still thinks her people and kingdom. Before leaving, Masahiro gave Rina his own personal four leaf clover as a good luck charm and finally reveals his name as "Masahiro Hamasaki".

Since then, Rina and Masshiro have both been secretly in love with each other, but are still shy and nervous with expressing their true feelings as Rina is shown to constantly blush whenever she and Masahiro meet or if they alone together. Masahiro cares and loves Rina very much and can easily tell if something is bothering her. He is also shown to put Rina's happiness before his own as he was afraid that he ruined her chance at being a pop idol and was willing to try and fix his mistake, despite knowing that he probably wouldn't see Rina anymore. Masahiro's love for Rina is revealed to be incredibly strong as Masahiro had admitted to Karen that he's been in love with Rina ever since he first saw her and there is no one else. Masahiro is also shown to fight for his love for Rina, even admitting that he will follow her whenever she goes and would give up everything to be with her.

However, unknown to Masahiro although Rina realizes she is in love with him, she struggles to decide if whether they should continue their relationship. Since Masahiro isn't aware of her true identity as a mermaid princess, Rina knows she must one day leave the surface and return to the sea world to rule her kingdom. Rina attempts to break off their relationship, believing if they grow more closer and further fall in love than the heartbreak will only be more greater when they must part ways. Masahiro refuses Rina's wishes while knowing she must return to her country one day, he attempts to assure her no matter where she is, he will always be with her. Rina is touched, but stills refuses to continue their relationship any further, much to their own heartbreak. However, during a battle with Alala, resulting in a cliff being destroyed, Masahiro falls into the ocean. Extremely worried for Masahiro, Rina jumps into the water and saves him. Upon regaining consciousness, Rina breaks into tears of joy, greatly relieved and thankfully Masahiro is alright. Masahiro embraces Rina and confesses he will never let her go again. Finally realizing she can longer deny their love and no longer letting fears of the future hold her back, Rina and Masahiro finally declare their love and share their first kiss, finally and officially becoming a couple. 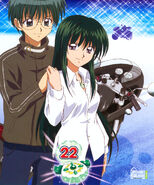 Retrieved from "https://loveinterest.fandom.com/wiki/Masahiro_Hamasaki?oldid=90669"
Community content is available under CC-BY-SA unless otherwise noted.