Mary Fiore is the main protagonist of the 2001 romantic comedy film, The Wedding Planner. She is a successful wedding planner and is the main love interest of Steve Edison.

Mary is a professional wedding planner, strongly displayed as she knows exactly what her clients want for their dream wedding. Mary is highly organised and professional, carefully planning every detail of the wedding and knows exactly what to do in any situation from the father of the bride missing to know how to calm down the nervous bride to be when she begins to have second thoughts. Mary also makes sure she doesn't get emotionally involved in weddings. Mary also has a keen sense in marriage as she regularly bets with her friends to see how long a marriage will last. Mary cares for her family as she has a close relationship with her father ever since her mother dies and goes to visit her mother's grave. Mary enjoys being with her friends such as her close friend, Penny and her dads elderly friends. However, Mary is revealed to be insecure and unsure of romance for herself ever since she broke off her previous engagement with her ex-fiancé several years prior to the events of the movie while causing her not to pursue any romantic relationship ever since.

Steve Edison is the fellow protagonist of The Wedding Planner and is the main love interest of Mary. Steve and Mary first met when Steve saved Mary's life from an on-coming dumpster that nearly crashed into her while she was trying to retrieve her shoe that was stuck on a sewer lid. While Mary didn't receive any injuries, she was in a daze and soon lost consciousness and Steve carried her and transported her to the hospital he works. Mary regained consciousness, finding herself at the children's ward at the hospital and was soon reunited with Steve, assuring she is alright and doesn't suffer from any head injuries. Mary developed romantic feelings for Steve, quickly fixing her appearance, not wanting to look poor in front of him and confirmed to make sure he didn't have a girlfriend when she asked the photo in his office, learning it's his sister. Mary's close friend and colleague, Penny arrived and quickly realizing Mary's feelings towards Steve, arranges for them to watch an old romance film in the park later in the night to bring Steve and Mary closer together and to help Mary find love in her life again.

Massimo Lenzetti is an old childhood friend who desires to marry Mary, but his feelings are unrequited.

Keith is Mary's ex-fiancé. Six years prior to the events of the movie, Mary was engaged to Keith. The history between Mary and Keith is unknown as not much details regarding their previous relationship is revealed, but at somepoint Keith proposed to Mary and she accepted. However, shortly before their wedding, on the night of their rehearsal dinner, Mary discovered that Keith had secretly been having an affair. Mary caught Keith in the act, finding him Keith cheating on her with his high school sweetheart, kissing in her car. Mary was devastated and deeply hurt, causing her to give up on dating for several years until the events of the movie. While Mary is happy that she didn't marry him, she partially blames herself for their relationship ending, believing she wasn't enough for Keith. 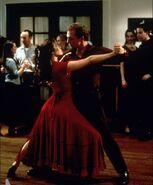 Retrieved from "https://loveinterest.fandom.com/wiki/Mary_Fiore?oldid=78618"
Community content is available under CC-BY-SA unless otherwise noted.