Marinette Dupain-Cheng (also known as Ladybug) is the main female protagonist of Miraculous: Tales of Ladybug & Cat Noir. She is an uprising young girl dreaming to become a fashion designer and is best friends with Alya Césaire. She is also the main love interest of Adrien Agreste/Cat Noir.

Adrien Agreste is the main male protagonist of the series as well as Marinette's partner and main love interest. In their civilian identities, Marinette is head over heels for Adrien, albeit unaware of such feelings. Her feeling are predominantly shown whenever she interacts with her friend. She often flusters and stutters around Adrien when he talks with her. As the series continues she grows more closer to Adrien and is getting over her shyness around him. She cares deeply for Cat Noir and would do anything for him even if it means risking her life for him.

Luka Couffaine is Juleka Couffaine's older brother introduced in the second season. Luka and Marinette first met in Captain Haddrock and Luka quickly develops romantic feelings for her. Luka even confesses his feelings to her in Silencer.

Nathaniel Kurtzberg is a shy art student and classmate who harbours unrequited romantic feelings for Marinette. Marinette and Nathaniel are friends and thinks he is a talented artist but never expected him to have a crush on her. In the episode Evillistrator.Marinette teams up with Cat Noir to defeat Nathaniel's evil side. This hurts him deeply after finding out what happened. As Ladybug, Nathaniel appreciates her for protecting Paris from Hawk Moth and his akumitized villains. He might have a crush on Ladybug but it is unknown if he still has a crush on her. 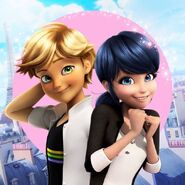 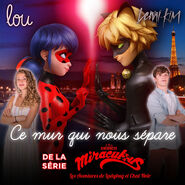 Marinette and Adrien dancing together.

Retrieved from "https://loveinterest.fandom.com/wiki/Marinette_Dupain-Cheng?oldid=95281"
Community content is available under CC-BY-SA unless otherwise noted.