Mai Kujaku (Known as Mai Valentine in the English dub) is the implied love interest of Joey Wheeler in Yu-Gi-Oh. Despite their age gap, along with the very creator of Yu-Gi-Oh stating that Mai and Jonouchi are just friends, their relationship shows many hints of being a romantic one.

Mai is a typical femme fatale who employs various tactics to con men into giving her whatever she wants, such as enticing a teenage boy into playing a rigged game with her by offering to give him a kiss, only to steal his hotel room when he inevitably lost. She's a very jaded young woman, believing that camraderie is a weakness.

Mai's deck is based around female-oriented cards such as Harpies, Amazons, bondage and vanity. All play into her femme-fatale image.

Mai first meets Yugi and Jonouchi at the Duelist Kingdom tournament. At first she's very rude and mean towards Yugi, Jonouchi and their friends. After Jonouchi figures out her under-the-table strategy, he beats her in a duel and she begins to see another side to him. Yugi comes to Mai's rescue after she's forced into a duel that she could never win, further earning her respect and making her realise that she's not alone. After Yugi loses to Kaiba before he can reach the finals, Mai offers him some of her tokens which would allow him to get in. When one of the finalists tries to get Jonouchi disqualified by stealing the card he was required to present at the finals, Mai offers him her own after losing to Yugi, finally stating that they are indeed friends.

Sometime later, Mai meets Yugi and Jounouchi at the Battle City Tournament. She's much friendlier towards them this time around and hopes to duel them at the finals once again. When Mai is paired up against Malik, she bites off more than she can chew and Malik mentally tortures her before putting her into shock. Jounouchi is devastated and vows to beat Malik, but is subjected to the same treatment. Yugi finally stops Malik and Jounouchi rushes to Mai's bedside to see if she's recovered. At first it seems like Mai might never recover, but then she starts smirking at the sight of Jounouchi crying and admits she just wanted to prank him. Mai and Jounouchi go their separate ways after this, though the anime shows them meeting up again several times. 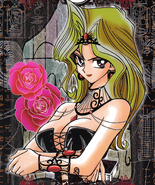 Mai and Jounouchi 3
Add a photo to this gallery
Retrieved from "https://loveinterest.fandom.com/wiki/Mai_Kujaku?oldid=90668"
Community content is available under CC-BY-SA unless otherwise noted.