Lexi is the daughter of the Nekross King, the younger sister of Varg, the former Princess of Nekron and the co-secondary antagonist turned supporting protagonist of the British science-fantasy series Wizards vs Aliens. She was an enemy and later love interest of Tom Clarke.

She is portrayed by Gwendoline Christie.

She along with her father, brother and other Nekross travelled the universe in their spaceship the Zarantalus to consume anything and anyone with Magic, which is a food source to Nekross. They eventually reached the last planet to have Magic, which was Earth. However, a 16-year-old wizard named Tom Clarke vowed to not let the Nekross take away Earth's Magic.

Throughout the series, Lexi and the Nekross battled with Tom for Magic. In the episode "Friend or Foe", Lexi used a form filter to disguise herself as a human called Lucy in order to get to Tom. However, the two were captured by an Unenchanted (non-magical) woman named Stephanie Gaunt who planned to use Tom's magic and Lexi's alien technology to steal The Crown Jewels. Putting aside their differences, Lexi and Tom work together to escape Gaunt, who is later taken by Lexi to the Zarantalus and fed to the King's pet Skorpalus.

Following this, Lexi reverts back to her original plan to take Earth's Magic and her relationship with Tom goes back to being enemies. In the episode, "The Thirteenth Floor", after Varg disappears whilst searching Wyvern House, Lexi changes back into Lucy, but ends up trapped in the Neverside with Tom. Due to the time difference between the Neverside and Dayside, Lexi (still in her human form) and Tom spend 20 years trapped in the Neverside (which is only a short time in the Dayside) and fall in love and have a son together named Benny Jr. (named after Tom's Unenchanted best friend Benny Sherwood). When Benny Jr. is around 6 years old, Lexi and Tom are eventually saved by Benny and return to the Dayside with Varg (who was transformed into a satyr in the Neverside). However when returning to the Dayside, Lexi, Tom and Varg revert back to their original forms and Benny Jr. vanishes from existence.

Though her memories of the Neverside start to fade, Lexi has dreams about Benny Jr.. In the episode "Endless Night", Lexi and Tom's memories of the Neverside return, which makes Lexi question where her loyalty lies. In the Series 2 finale "All Out War!", after Tom is extracted of his Magic by the Nekross, a redeemed Lexi drags him over to a window on the Zarantalus facing the sun in order for Tom to be exposed sunlight in order to regain his Magic. She is successful, but catches Zanti Scale Contamination in the process. Lexi nearly dies from this, but luckily after drinking raw Magic, Tom is able to save her by turning her into a human, sending her down to Earth and resurrecting Benny Jr., so she will be happy. 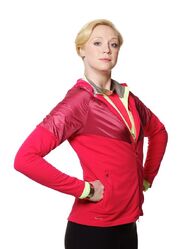 Lucy, Lexi's human form
Add a photo to this gallery
Retrieved from "https://loveinterest.fandom.com/wiki/Lexi_(Wizards_vs_Aliens)?oldid=44132"
Community content is available under CC-BY-SA unless otherwise noted.