Leah Estrogen is the love interest of Osmosis Jones and was voiced by Brandy Norwood.

She was first seen at her office where she told the mayor about Tom's campaign video and ask him about Frank's health.

Later on, she was sent to get a cold pill named Drix and while she's waiting, she notice that Osmosis was flirting with her which she's not interesting and thought him as a jerk.

She wasn't seen again until she was at the mayor's office where Drix and Osmosis came in and was curious about Osmosis's story (the one when he first saw a virus named Thrax).

Later on, she was seen again after realizing that something is wrong and told the mayor that Osmosis was right about Thrax. Realizing that the mayor only care about his re-election than their life, she angrily left to find out and later got kidnapped by Thrax.

When she got kidnapped, Ozzy and Drix rescue Leah and confront Thrax who leaves Frank's mouth after causing Frank to sneeze using pollen bombs.

Ozzy is launched out after him by Drix where Ozzy and Thrax fight one of Shane's eyeballs and end up on Shane's false eyelashes after she blinks which she was wearing atop her natural ones.

During the fight, Thrax threatens to break his own record by killing Shane, but Ozzy tricks him into getting stuck on Shane's false eyelash and fall into a vessel of alcohol below where he dissolves.

During this time, the situation becomes even more dangerous when the temperature hits 108 degrees, causing Frank to go into cardiac arrest.

Just as doctors begin to give up, Frank is revived when Ozzy returns to Frank via one of Shane's crying tears with the DNA chain containing the missing hypothalamus chromosome.

Ozzy is reinstated into "Immunity" with full privileges, Ozzy and Drix are declared heroes with the Chief of Police giving Ozzy his job back.

While Osmosis was planning on extending Drix's time in Frank with the help from the hemorrhoid, Leah returns his affections and told him "Come here, baby. I'm still joneseń for little us osmosis."

Then, she kiss him on the lips which Osmosis was shocked, but happily kiss back. 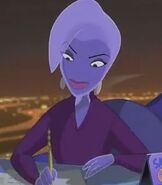 Leah's first appearance
Add a photo to this gallery
Retrieved from "https://loveinterest.fandom.com/wiki/Leah_Estrogen?oldid=43002"
Community content is available under CC-BY-SA unless otherwise noted.