Kimberly is a Pink Ranger and is part of the original team along with Jason, Zack, Billy and Trini. When she first met Tommy she started to like him. They dated during Mighty Morphin Power Rangers´s three seasons.

In Power Rangers Zeo, she sent a letter to Tommy saying that he will always be her friend but that she met someone else and she fall in love with him.She also said she didn´t want to lie to Tommy. Tommy was really sad after the break up but eventually he fall in love with the new pink ranger, Kat Hillard.

In Turbo movie, Kimberly appeared with Jason and there are speculations about that Jason and Kimberly started dating. The script writer said they were going to add a love line between Jason and Kimberly, but they changed the story. There were moments between them that made fans think that Kimberly is probably dating Jason but this wasn´t officially confirmed. Kimberly was seated next to Ernie in the finale. After Tommy, Adam, and Jason won the martial arts competition, she was cheering for Jason, not Tommy. In the credits in Turbo movie, there was also a scene where Kimberly and Jason hugged each other but their current relationship is unknown.

In the episode in Wild Force "Forever Red", Kimberly was mentioned by Jason. When Cole Evans said that "Tommy was the greatest ranger." Jason commented "Are you kidding me? I was the one doing all the work while he was at the Juice Bar kissing on Kimberly!" . Kim and Jason´s relationship remains unconfirmed but there are speculations about that there could be love at that point.

Skull tries to kiss Kimberly but instead he kissed Bulk 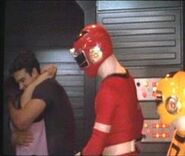 Jason and Kimberly's Romance in Turbo: A Power Rangers Movie

Kimberly In Mighty Morphin Power Rangers The Movie
Add a photo to this gallery
Retrieved from "https://loveinterest.fandom.com/wiki/Kimberly_Hart?oldid=99424"
Community content is available under CC-BY-SA unless otherwise noted.