Kida Nedakh is the deuteragonist and love interest of the 2001 Disney film, Atlantis: The Lost Empire. She is the Princess and later Queen of Atlantis and is also the main love interest of Milo James Thatch.

She is first seen as a little girl when she sees a gigantic tsunami destroying the central city of Atlantis, but she had lost her mother. Centuries later, Kida sees a small group of hunters and gathers through the earth's many caverns and catacombs when they discover outsiders approaching their city. She first meets Milo Thatch and a friendship is made as Milo helps her out while exploring the city as they also learn more about each other. However, Lyle Rourke forces Milo to cooperate by having a gun pointed at Kida. She watches in horror. She strikes her father down before he discovers where the Heart of Atlantis is hidden. She is then called upon the crystal and she bonds with it as a huge force field appears to protect the city from an awakened volcano as Milo defeats Lyle Rourke by scarring his skin with a crystal and turning him into a crystal statue as Rourke shatters into pieces. After her father's death, Kida becomes Queen of Atlantis as Milo decides to stay with her as the two have fallen in love with each other. By the end of the first film, she and Milo are married and have restored the city. 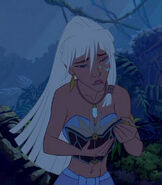 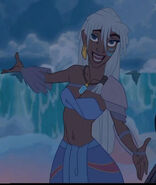 Welcome to the city of Atlantis

Kida hugs Milo
Add a photo to this gallery

Retrieved from "https://loveinterest.fandom.com/wiki/Kida_Nedakh?oldid=94921"
Community content is available under CC-BY-SA unless otherwise noted.