Kazuto Tokino is the male protagonist of the anime and manga series, UFO Princess Valkyrie. He is the owner of the family Tokino Bathhouse and is the older brother of Rika Tokino. He is also the main love interest and official fiancé of Princess Valkyrie.

Kazuto is kind, caring, gentle, sincere, thoughtful, considerate, honest, responsible, reliable, persistent, dedicated and hardworking. Although several people including his parents and sister advised Kazuto to give up on running the family bath house, Kazuto refuses and shows great determination to make it into a great business. He is also serious and occasional stubborn and becomes a parent figure to the child version of Valkyrie, while also beginning to fall in love with her, looking past her child appearance. Kazuto is also protective of anyone close to him, such as protecting Valkyrie from returning to Valhalla with Hydra and later Prince Triam and prevented Sanada from trying to turn Akina into a cat girl.

Valkyrie is one of the Eight Princesses of the Royal Family of Valhalla and is Kazuto's main love interest. Kazuto and Valkyrie first met when Valkyrie crashed landed her spaceship on his family bath house. Kazuto was nearly killed during the crash and Valkyrie, feeling guilty for causing his injuries, healed Kazuto by giving up half her soul to restore him to life. However, due to her actions it caused one side affect, Valkyrie was transformed into a child as well as having the mind of a child. Since then, Valkyrie has began living with Kazuto and decides she wants to be with him forever and soon they both begin to develop a close bond together. Kazuto becomes a parent figure to the child form of Valkyrie, keeping her from getting into trouble, but is also protective and playful with her.

Valkyrie is able to temporarily return to her true adult form when she and Kazuto share a kiss when their hearts are in sync with one another due to their now shared souls. Kazuto gets to meet the true adult form of Valkyrie, but their time together is short lived as Valkyrie once again returns to her child form, revealing her soul still hasn't fully healed. Despite Valkyrie's child appearance, she and Kazuto fall in love with each other, but express difficulty in their relationship as Valkyrie still has yet to return to her true adult form. Kazuto believes they are still far apart from each other, believing he can't learn the true adult Valkyrie and expresses this difficulty to their relationship sometimes. Eventually, he learns to overtime the issue, learning to look past Valkyrie's child form and truly falls in love with Valkyrie for who is on the outside and inside. He later becomes her offical fiancé, greatly pleasing Kazuto and Valkyrie as they want a future together.

Akina is Kazuto's childhood friend. Kazuto and Akina share a close friendship, having been friends since childhood. Akina and Kazuto had a nice childhood together, spending much of their time in each other's company and playing together. Akins deeply cherishes the childhood memories of her and Kazuto's relationship. However, unknown to Kazuto, Akina has secretly harboured romantic feelings for him her whole life, but she is unable to confess her feelings due to both her stubborn and shyness. When Valkyrie appears in Kazuto's life, Akina becomes jealous of the relationship between Kazuto and Valkyrie and despite Valkryie's current appearance, she views her to be a love rival for Kazuto's love. Hydra becomes a close confidant to Akina and tries to convince her to admit her feelings for Kazuto, but to no avail. While several people, including Kazuto's sister Rika have teased him regarding his relationship wih Akina ever since childhood, Kazuto denies anything between them, much to Akina's sadness. Kazuto is oblivious of her feelings for him and while he still doesn't learn how she feels, he doesn't return her feelings as he only loves Valkyrie and plans to marry her one day. Although Kazuto doesn't share the same feelings for Akina, he does care a great deal about her and is worried when something bad happens to her. 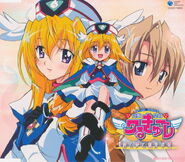 Add a photo to this gallery
Retrieved from "https://loveinterest.fandom.com/wiki/Kazuto_Tokino?oldid=90664"
Community content is available under CC-BY-SA unless otherwise noted.