Kagome Higurashi is the main female protagonist of the anime and manga series, Inuyasha. She is also the main love interest of Inuyasha.

Kagome is the reincarnation of a powerful priestess named Kikyo, Inuyasha's first love. Fifty years ago, an evil bandit made a deal with demons and became a powerful half-demon named Naraku and took both Inuyasha's and Kikyo's forms to make them turn on each other. Which made Kikyo seal Inuyasha to a tree while succumbing to the wounds Naraku placed upon her. Kikyo was in charge of protecting a powerful jewel known as the Shikon no Tama. Naraku hoped Kikyo would use the Shikon Jewel to save herself so she would become his, but when she died, she had the Jewel burned with her.

When Kagome reached her 15th birthday, a demon known as Mistress Centipede drags her through the Bone-Eater's Well, taking her back to the Feudal Era. When the demon gets the Shikon Jewel out of Kagome, Kagome removes Inuyasha's seal to slay Mistress Centipede. Still bitter about being "betrayed," Inuyasha goes after Kagome. Kaede, Kikyo's younger sister, throws the Kotodama no Nenju (Beads of Subjugation in English dub) around Inuyasha's neck, allowing Kagome to control Inuyasha by saying "sit."

Sometime later, a demon crow steals the Shikon Jewel. Kagome is able to destroy the crow, but in the process, the Jewel is shattered into hundreds of shards that scatter across Japan. Inuyasha then is forced to work with Kagome to find them all as even a shard of the Jewel is enough to empower demons. During their journey, an ogress named Urasue captured Kagome and used her to revive Kikyo in hopes of finding all the Jewel Shards. Kikyo kills Urasue and asks Inuyasha why he betrayed her, startling Inuyasha. Kikyo loses her soul back to Kagome and now uses the souls of the dead to keep herself alive.

Inuyasha still had feelings for Kikyo, which ultimately made Kagome jealous, and Kagome starts to realize she has fallen in love with him. Things don't get any easier as a wolf demon is known as Koga, starts to fall for Kagome.

Eventually, Naraku gets all the pieces of the Shikon Jewel, becomes a full demon and kills Kikyo, seemingly free of Onigumo's heart. However, when Kagome asks him what his true wish was, he is startled by the question and hesitates to attack, allowing for his new body to be heavily damaged from Inuyasha and Sesshomaru's attacks. As he falls, he realizes his true wish was Kikyo's love. As Naraku dies, his soul and that of Kagome's are placed into the Jewel to fight inside it for all eternity. However, Kagome wishes the Jewel out of existence, and Naraku is purified completely as the Jewel fades away.

Kagome spends three years in the modern era, and once she turns 18, she goes back into the Feudal Era and marries Inuyasha.

When Kagome first arrived in the Feudal Era, she wondered around trying to find a way home, and upon recognizing the Sacred Tree nearby, she assumed she was nearly home. Instead, Kagome found Inuyasha sealed to the Sacred Tree in a slumbering state. Later, Inuyasha and Kagome officially met each other for the first time when Inuyasha was reawakened by Kagome, due to her being Kikyo's reincarnation. Inuyasha mistook Kagome for Kikyo, but upon closer inspection, realized they really were different people. During this time, Kagome and the villagers were being attacked by Mistress Centipede, wanting to gain the Shikon Jewel. In order to stop Mistress Centipede, Kagome freed Inuyasha from his seal, but soon afterward, he attempted to kill Kagome, intending to claim the Shikon Jewel for himself to become a full-fledged demon. However, Kagome was saved by Kikyo's younger sister, Kaede, who placed a necklace around Inuyasha, and by hearing a trigger word, Inuyasha was subdued.

Originally when Inuyasha and Kagome first met each other, Inuyasha immediately disliked Kagome as she reminded him of Kikyo due to their similar physical appearances. Inuyasha was still deeply hurt from Kikyo's betrayal towards him, having impaled him with one of her sacred arrows, sealing him away for 50 years and thus took his anger and frustration with Kikyo out on Kagome. However, with time, this begins to fade as Inuyasha comes to fully realize Kagome and Kikyo are completely different people. Later, Inuyasha and Kagome form a partnership to regather the shards of the Shikon Jewel after being shattered throughout Feudal Japan. During their journey, Inuyasha and Kagome become friends and find themselves becoming more closer to each other as both learn more about the other and become more friendly towards one another.

While Inuyasha is fully aware of his love for Kagome, he also comes to realize that he is still in love with Kikyo, causing great difficulty as he can't choose between them. Due to this, Inuyasha and Kagome don't have an official relationship together but are still somewhat romantically together. Kikyo has been the source of many arguments between Inuyasha and Kagome, and she is one of the most serious love rivals threatening their relationship on numerous occasions. Inuyasha's love for Kikyo causes Kagome to become greatly hurt and heartbroken as she comes to doubt Inuyasha's love for her on several occasions, believing he loves Kikyo more. Kagome also becomes jealous of the bond Kikyo and Inuyasha share together. The situations and events between them become severely serious as Inuyasha's loyalty for Kagome weavers due to his lingering romantic feelings for Kikyo, causing Kagome to almost consider leaving Inuyasha for good. However, upon fully realizing her love for Inuyasha, Kagome decides to remain by his side as it's too difficult to be apart from him and comes to accept that he can never fully forget about Kikyo.

However, aside from Kikyo interfering in their relationship, Inuyasha and Kagome face another love rival in Kōga, the leader of the Wolf-Demon Tribe. Originally Kōga kidnapped Kagome due to her power in sensing the Shikon jewel shards, but eventually falls in love with her and claims her as "his woman." Due to this, Inuyasha and Kōga become rivals and constantly fight with one another in regards to Kagome. Inuyasha becomes extremely jealous of Kōga and feels uneasy whenever he visits the group, afraid Kagome might harbor romantic feelings for him. However, Kagome harbors no feelings for Kōga, but remains polite towards him and tries to gently reject his feelings, but to no avail.

1 of 1
Add photo
While Kōga is fully aware of Inuyasha's love for Kagome, he remains blind and completely oblivious of Kagome's love for Inuyasha, even ignoring Kagome's first claim of her and Inuyasha's relationship during their first meeting. Eventually, Kōga comes to finally realize Kagome's true romantic feelings towards Inuyasha during an attack from one of the members of the Band of Seven. During a fight between Inuyasha and Renkotsu, resulting in an explosion, Kagome became devastated, believing Inuyasha was dead. However, upon discovering Inuyasha's survival, Kagome ran straight into Inuyasha's arms and embraced him, greatly relieved and delighted of his survival. Due to this, Kōga finally realized that Kagome is in love with Inuyasha, and no one would ever take his place in her heart. However, despite realizing Kagome's love for Inuyasha, Kōga vowed he would never give up on winning Kagome for himself.

1 of 5
Add photo
Overall, despite the obstacles and difficulties within their relationship, the love between Inuyasha and Kagome grows increasingly stronger as these situations also help to make their relationship become more serious. Aside from their deep love for each other, Inuyasha and Kagome care immensely about one another as both are extremely protective of each other. Throughout almost every battle they have together, Inuyasha and Kagome are always fiercely protective of one another as whenever danger appears, Inuyasha always carries Kagome to safety and does whatever he can to protect her. During some battle where it appears the odds are against them, Inuyasha surprises everyone around him as he lets out spontaneous amounts of strength in regards to Kagome's safety. Due to this, Kagome has been heavily proven to be the source of Inuyasha's strength, and during times when she is not present, Inuyasha becomes somewhat weak and really worried about her, proven as he does constant fidgeting until Kagome returns.

Kagome cares a great deal about Inuyasha both in and out of battle in regards to himself and his apparent low class as a half-Demon. Due to his harsh upbringing as a half-demon, being ostracised, bullied and looked down upon, Kagome has been able to heal the wounds in Inuyasha's heart. Kagome also brings out the best in Inuyasha and helps him grow into a better person, helping him to make friends with Miroku, Sango, and Shippo, learning to trust and depend on others, etc., thus allowing him to grow more into a caring and considerate person.

Koga was a wolf-demon whose pack kidnapped Kagome. Koga was instantly smitten with her and declared Kagome to be his mate. While Kagome clearly shows no interest in Koga, she never really brushes aside his advances, leading Inuyasha to believe that she might actually like him more.

Hojo is a classmate from Kagome's time who is frequently talked up by Kagome's friends as an ideal boyfriend. Whenever Kagome fakes an illness so she can go on adventures, Hojo offers her medicine, often ranging from simple remedies to medicines for comically bizarre illnesses. Clearly, he's not too sharp as he once waited several hours for Kagome to show up for a date, never once doubting her lies. 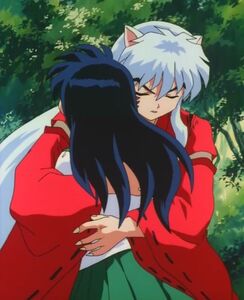 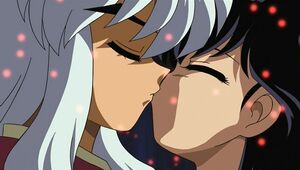 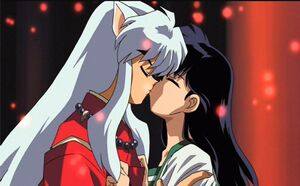 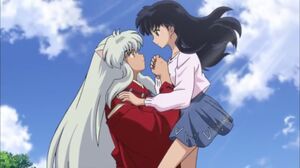 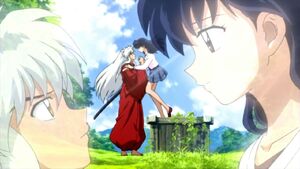 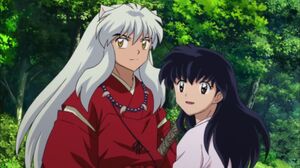 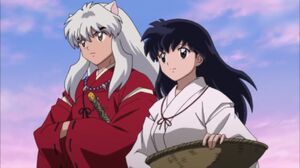 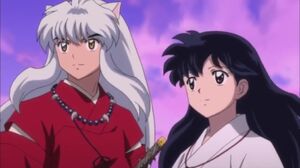 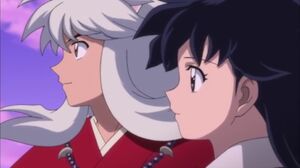 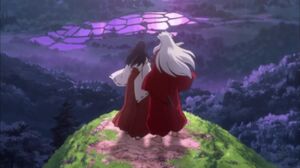 Retrieved from "https://loveinterest.fandom.com/wiki/Kagome_Higurashi?oldid=98372"
Community content is available under CC-BY-SA unless otherwise noted.