Jessica Olson is the female protagonist of the Disney Channel Original Movie, StarStruck. She is the younger sister of Sarah Olsen and is the main love interest of Christopher Wilde.

Jessica is an independent teenage girl and unlike everyone, she isn't a fan of Christopher Wilde. Jessica is the opposite of her older sister, Sarah, as unlike her sister, is responsible, honest, strong, independent as well as kind and caring. Jessica also displays a short temper, stubbornness and can be defensive when people are rude. Jessica has realistic views and sees Christopher as a stereotypical superstar, believing he only cares for himself, believing him to be an overall brat and openly expresses her dislike of him. However, Jessica lacks the understanding of some aspects of Christopher's life, not realizing how difficult it can truly be regarding the pressure of stardom and the constant following of the paparazzi. Although Jessica does come to realize her wrongdoings as well. Despite her tough exterior, Jesscia is sensitive when Christopher claims her is an "ordinary girl", making her believe he sees her as a nobody that he doesn't want to be seen with.

Jessica is the second youngest daughter of Barbara and Dean Olson and is the younger sister of Sarah Olson. Jesscia shares a close relationship with her grandparents as in her childhood, her grandfather as he use to take her fishing. However, during the years, Jessica's grandfather passed away and she still misses him. Jessica and Sarah don't always have the best relationship as Sarah is snobbish, self-centred and obsessed with famous superstar Christopher Wilde and unlike everyone, Jessica isn't a fan. While she enjoys Christopher's music, she isn't a fan of him personally, viewing him to be a stereotypical superstar and doesn't understand why everyone is crazy about him. Jessica is a reporter for her school newspaper.

In the beginning of the film, Jessica and her family are getting ready, preparing for a trip to Los Angelus, California to visit her grandmother. Jessica is unimpressed with Christopher Wilde and doesn't understand her Sarah's great love and interest in him. The next day while at school, Jessica attempts to gain information for the school paper of the upcoming school as she is one of the reporters. However, Sarah refuses to answer her questions, instead claiming Jessica isn't "invited" and instead talks about Christopher, expressing her strong desire to meet him while in California. After school, Jessica and her family get on their arranged flight and arrive in LA. Jessica and her family happily reunite with her grandmother and her boyfriend and meet her grandmother's car "Petunia" to use as Sarah is underage to rent a car in LA. Later that night, Sarah learns that Christopher Wilde will be performing at the birthday party of his girlfriend Alexis Bender and convinces Jessica to accompany to gain the permission of their parents. Jessica refuses, but Sarah convinces her, promising to stop talking about Christopher Wilde for the remainder of the trip. Jessica and Sarah arrive at the club and Sarah leaves Jessica to wait in the car while she attends the performance.

Growing impatient with her sister, Jessica leaves the car and attempts to locate. Jessica goes to the side entrance of the club, but instead she meets Christopher Wilde when he bumps her head on the door while secret leaving the club. Jessica is injured from the bump and worried about reporters catching them together, Christopher decides to take Jessica to the hospital.

Christopher Wilde is a famous super star and is Jessica's main love interest. While everyone else, including her older sister Sarah are fans of Christopher Wilde, Jessica is the only person who doesn't find him amazing as everyone else. Instead Jesscia looks at him, realistically and sees him as an spoiled rockstar and couldn't care about attending his concerts or even meeting him. However, a twist of fate occurs as Jessica and Christopher Wilde meet on her first night in Los Angeles. While attempting to find her sister who went to the Under21 nightclub to see Christopher perform, Jessica meets Christopher when he bumps into during his escape from his fans and the paparazzi.

Despite her best attempts, Jessica begins to develop romantic feelings for Christoper, finding herself caught in his charming smile and comments his eyes are truly blue. 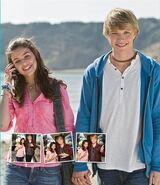 Retrieved from "https://loveinterest.fandom.com/wiki/Jessica_Olson?oldid=75873"
Community content is available under CC-BY-SA unless otherwise noted.