Jean Grey (also known as The Phoenix) is the main love interest of Cyclops and occasionally Wolverine in the X-Men comics.

She first appeared in X-Men #1 in 1963. She has powerful telekinectic abilities and telepathic abilities only Professor Xavier can surpass. Her powers aren't as stable as Xaiver's though. When left unchecked, Jean's powers have the potential to take over her mind and make her into a destructive force known as Dark Phoenix.

In the beginning of the series, Scott is revealed to secretly be in love with Jean, but she is already in a relationship with Duncan Matthews. However, despite her relationship with Duncan, Jean is revealed to also have true romantic feelings towards Scott while also beginning to realize Duncan's true personality and attitude. Throughout the first two seasons, Scott and Jean's feelings grow more stronger, including the special bond they share together, having been close friends since both have been one of the X-Men first recruits. It's also known that both Scott and Jean's feelings for each other are no secret as everyone from their fellow X-Men and classmates are shown to be aware of their mutual feelings for each other and keep wondering when they will finally get together while constantly teasing them about their feelings. Scott and Jean are also shown to be jealous whenever other people are interested in the other, showing several times throughout the series that Scott is jealous and has a rivalry with Jean's boyfriend, Duncan and Jean is jealous when Scott begins dating classmate, Taryn.

Eventually, in the beginning of the third season, when the X-Men are revealed to the public, Jean breaks up with Duncan, discovering he wanted to wrongly use her powers for his own advantages. Later, Jean finally gathers the confidence to confess her strong romantic feelings for Scott after some encouragement from Storm. However, before she could confess to Scott, his brother Alex called needing his help, claiming to be stranded in Mexico. Scott went to help him, only to discover it was trap by Mystique which soon lead Scott to lose his glasses and become stranded in the desert. Jean discovers the truth through her strong connection with him and after speaking with the real Alex, goes to Mexico to find him, soon learning that Mystique has been trying to kill him. Finally, after defeating Mystique and reuniting together, Jean and Scott finally confess their feelings for each other and at long last finally become a couple. Since then, Jean and Scott have been in a serious relationship together.

Wolverine and the X-Men

In the series, Jean and Scott have been in a longtime romantic relationship together, but when Wolervine arrives and develops an attraction towards Jean soon having a flirtatious relationship. Scott soon grows seriously jealous and eventually attacks him. Jean discovers the fight and is deeply upset with Scott as Logan has decided to leave. However, under mysterious and unknown cause, the X-Men were attacked with the mansion destroyed and both Professor Xaiver and Jean have mysteriously disappeared. When the X-Men split up after the incident, Scott goes into a depression for a year after Jean's disappearance, but later rejoins them after Wolverine brings everyone back together.

Scott misses Jean greatly throughout the series and always tries to find out what happened to her and still believes she is alive. However, this causes problems with the team at this has lead them to fight against some of their worst enemies. Eventually, Scott decides to erase his memories of Jean with the help of a Emma Frost. While looking his memeories, Emma sees all the hardships Scott went through, but since meeting Jean she realizes she took all the pain away. However, Scott and Emma discover that Jean was responsible for the explosion as it was it was the cause of the Phoenix. Eventually, Jean is revealed to be alive, having been in a coma at a hospital this entire time, but has amnesia. Scott and Emma discover the news and finally reunite with Jean and learn about her amenesia.

Cyclops is Jean's main love interest throughout the X-Men franchise. He and Jean have known each other since the X-Men's early years. The two are very close. They eventually got married, only for Jean to be killed by Xorn.

Jean and Wolverine have had a flirtatious relationship together and have even exchanged a few kisses.

Jean as she appears in X-Men: Evolution.

Jean and Scott attempting to confess their feelings for each other.

Wolverine and the X-Men

Jean as she appears in Wolverine and the X-Men.

Jean as she appears in X-Men.
Add a photo to this gallery

Jean in the live-action films 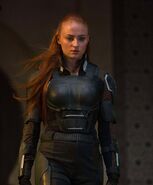 Jean as she appears in X-Men: Apocalypse played by Sophie Turner

Jean Grey as the Dark Phoenix

Jean and Scott in X-Men

Jean and Logan in X2: X-Men United
Add a photo to this gallery

Dark Phoenix
Add a photo to this gallery

Retrieved from "https://loveinterest.fandom.com/wiki/Jean_Grey?oldid=94865"
Community content is available under CC-BY-SA unless otherwise noted.