Start a Wiki
Iris West is a major character of the DC comics superhero, The Flash and is the main love interest of Barry Allen. She is also the aunt of Wally West, the first Kid Flash and grandmother of Bart Allen.

Iris is a reporter in Central City. She was killed by Reverse Flash later on. It is then revealed that Iris was originally from the 30th century and her death wouldn't be permanent due to a time paradox that compelled her parents to put her conciousness into a new body.

Barry and Iris have had a long-standing relationship during his time as the Flash. She was unaware of Barry's double life until they were married. When Iris is brough back to life, Iris and Barry live together in the 30th century. After Barry is sucked into the timestream following Crisis on Infinite Earths, Iris disappears from the comics for awhile. When Iris was possessed by the Anti-Life Equation, it was Barry's kiss that brought her back.

In Flashpoint, Captain Cold is the hero of Central City and Iris is attracted to him. Captain Cold only sees Iris as a prize and was planning on skipping the country with Iris in tow. When Iris found out that Captain Cold had killed Wally West, she overcame her attraction to him and killed him wih his freeze gun. 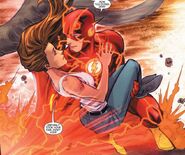 Retrieved from "https://loveinterest.fandom.com/wiki/Iris_West?oldid=97378"
Community content is available under CC-BY-SA unless otherwise noted.