Karai is a rebellious former member of the Foot Clan, a master kunoichi, and the 16-year-old adoptive daughter of the Shredder. She is voiced by Kelly Hu in this variation. Karai was also revealed to be Hamato Yoshi's long-lost biological daughter and the Turtles's sister, Miwa, in Showdown, Part 2 whom he had believed had also perished in the fire fifteen years ago. In Vengeance is Mine, she was inadvertently mutated into a snake-like serpent, but she retains some of her humanity and has partial control over it. She is a major recurring character in the show.

Leonardo is the first of the Turtles that Karai meets. While she attacks and fights with him often, she never does him any serious harm and just enjoys sparring with a worthy opponent. Leonardo, in turn, was both confused by and attracted to Karai (as shown in the episode "New Girl in Town"). She is dangerous, but Leo believed that there was some good in her but she betrayed him. She seems to be deceitful and manipulative inThe Alien Agenda, using Leo's feelings for her against him, especially in his time of need. In Enemy of My Enemy, she returns, seeking information about the Kraang from the turtles. This time, instead of wanting to fight the turtles, she decides to make a truce with the turtles in order to defeat the Kraang ship. She goes against the Shredder's orders because she knows they'll all die if they don't set aside their differences and take down the ship. At first, the turtles, mainly Leo, are very skeptical of her and decline her REQUEST for a truce, but after she leads it away from the Shellraiser, they comply. Because Leo saved her and allowed her to speak to all of Turtles, Karai develops some friendship for him. However, because he and his brothers tried to attack her father, the truce was called off and her trust in him was left now uncertain. Now she's vengeful towards the turtles and is willing to do whatever it takes to take them down. It was revealed in the Season 1 finale that Karai is Splinter's lost daughter (Miwa), who was raised by the Shredder. Leo seems more aggravated with Karai as she wants to hurt him and his loved ones more often, he tells her that her vendetta is with him not his family. In Follow The Leader Splinter told Leo that Karai is his daughter. Near to the end of The Manhattan Project, Part 1, Leo told Karai that Splinter is her true father but she neglects it. In The Wrath of Tiger Claw, Karai was thinking about what Leo said about Splinter being her true father. When Karai finally realized that Splinter is her father, she betrayed Tiger Claw in trying to terminate the Turtles and Splinter, which caused Tiger Claw to take Karai BACK to Shredder to be locked in a cell. In Vengeance is Mine, Leo and his brothers staged a rescue operation to get Karai from Shredder. It worked well and Karai was reunited with Splinter. When Leo and Michaelangelo was training, Michaelangelo threw one of his water balloons at Leo, which made Karai giggle. When Karai was planning on taking down Shredder, Leo wanted come along with her. Karai came CLOSE to Leo and temporarily blinded him with a smoke egg. Splinter, Leo and his brothers went to rescue Karai again. Leo was about to rescue Karai when all of sudden Shredder broke the chain that was holding Karai's cage, which caused her to fall into the mutagen. When she becomes a mutant, Leo appears to be one of the only people (aside from Splinter) that can help briefly restore Karai's mind by reminding her of who she is. In the episode Tale of the Yokai, the baby Karai met Leo, who had traveled back in time.

This relationship was short lived. In the episode Deadly Venom, a mind-controlled Karai was sent by Shredder to hunt down not only the turtles, Splinter but also April and Casey Jones.

After striking April first, Karai went after Casey whom is seen riding his bike on the way home and made a good impression on her after he easily defeated a bunch of Foot Bots with one home made missile from his bike. Karai than kicks Casey off his bike, as he gets up he see's and meets Karai for the first time and he too is impressed of what he is seeing then the two began to fight. Casey managed to make Karai trip but he catches her in time and winks at her and asking if he should either fight her or date her, Karai managed to grab Casey with her snake arms, she begins to wrap him up and brings him closely and as she what we thought was going to bite him instead she kisses him and lets him go. Casey walks away from her but all happy and woozy and claims that he liked it but then he realized that his lips feel funny and Karai tells him that she just poison him with her deadly venom and leaves to find the turtles. 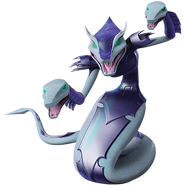 Retrieved from "https://loveinterest.fandom.com/wiki/Hamato_Miwa?oldid=95361"
Community content is available under CC-BY-SA unless otherwise noted.