Gwen Stacy is a major character from the Spiderman series. She is the second main love interest of Peter Parker/Spider-Man.

When Peter meets Gwen, he was already dating Mary Jane Watson, but he breaks up with her, and starts dating Gwen almost immediately. However, their relationship comes to a hault, after Gwen's father dies, and she blames it on Spiderman. Gwen eventually is able to accept that it wasn't Spiderman's fault, and gets back together with Peter. Unfortunately, the Green Goblin manages to kill off Gwen, leaving Peter heartbroken. He eventually goes back to dating MJ.

Gwen Stacy in this universe was a friend of Peter Parker who was taken in by Aunt May after her father, George Stacy, was killed. She was later killed by the Ultimate version of Carnage, who drained her of her blood for her DNA. The later version of Carnage was drained of the Carnage element, and turned out to be a Gwen Stacy clone, complete with her memories prior to Carnage killing her. She and Peter decided that he loved Mary Jane more and that because she was adopted, they should view each other as siblings. Peter Parker died in the Ultimate universe, leading to Miles Morales succeeding him.

In the alternate reality created by the insanity of the Scarlet Witch, Gwen Stacy never died. Peter Parker of this alternate universe became Spider-Man, but got a start by being a celebriny pro athlete and movie actor and co-founding a company called Spider-Man, Inc. With Uncle Ben, whose death was averted when Peter beat the Burgular ton show off his powers at the wrestling arena. Peter Parker reunited with Gwen and they married, having a son named Richard. Peter Parker lived the lie that he was a mutant to dodge discrimination when Magneto and the mutants took over the world. Peter Parker of House of M died in the Spider-Verse, making the tragedy reversed so that Peter died and Gwen lived.

Discovered as a survivor of the Spider-Verse, Gwen Stacy of the alternate universe was bitten instead of Peter Parker, becoming Spider-Woman. Similar to House of M, the tragedy was reversed as Peter Parker died and Gwen Stacy lived. She currently visits the 616 occasionally and is currently dating Miles Morales, a younger Spider-Man who was formerly the Spider-man of the Ultimate Marvel Universe but is now native to 616 after Secret Wars altered history.

Gwen appeared in the film Spider-man 3, where she poses as a threat to Peter's main love interest in this film series, Mary Jane. She was played by Bryce Dallas Howard.

Gwen also appears in the new reboot of the movie The Amazing Spider-man, where she appears as the primary love interest. The two date throughout the movie, and she is aware of Peter's secret. She was played by Emma Stone in this version.

She also appeared in The Amazing Spider-man 2, where she is still Peter's love interest with Emma Stone reprising her role. She is first seen as class valedictorian during the High School graduation.

She broke up with Peter, but she sees Peter again and the two reconcile their relationship. She helped Spider-Man defeat Electro by overloading the power.

After Spider-Man battled Harry Osborn and trying to save Gwen, Peter defeats Harry and Gwen falls to her death and Peter becomes heartbroken as he visits her grave, but Peter continues being Spider-Man after watching Gwen Stacy's speech at the graduation ceremony.

Gwen Stacy appears in the series as one of Peter Parker's best friends and main love interest. She is the daughter of Police Captain, George Stacy and has been best friends with Peter since childhood and is also close friends with Harry Osborn, Eddie Brock and Mary Jane Watson. However, unknown to Peter, Gwen has secretly been in love with him ever since the 7th Grade, but is shy and nervous to express her feelings, but begins to make more efforts and attempts to express them. Throughout the series, everyone soon becomes aware of Gwen's love for Peter and eventually by the end of the first season, Gwen confesses her feelings, kissing Peter. Due to this, Peter begins to realize his true feelings for Gwen, but is caught in a love triangle between her and popular girl, Liz Allen. Peter attempts to work through his feelings and manages to fully realize he wants to be with Gwen, but after Liz confesses her feelings and kisses Peter on New Year's they become a couple, hurting Gwen. Aside from Peter, Harry Osborn has secretly harboured unrequited romantic feelings for Gwen and they become closer when Gwen learns and attempts to help Harry with his Green Goblin serum addiction.

In the second season of the series, Gwen begins dating Harry shortly after Peter begins a relationship with Liz, but both don't feel the same way towards their respective partners. Throughout the remainder of the series, their feelings grow stronger and towards the ending of the series, Gwen undergoes a makeover. In the series finale, Peter finally admits Gwen is the true person he actually loves and Gwen finally and properly confesses her own love for Peter in return. They attempt to share a kiss, but stop themselves, deciding to officially end their relationships with Harry and Liz, before they can really be together. Peter is successful in ending his relationship with Liz, but Gwen is forced to stay together with Harry since she is the only person holding him together after the "death" of his father. However, unknown to both Gwen and Peter, Harry overheard their confession and decision to end their relationships, greatly angering and hurting him and uses his father's death to convince Gwen to remain together with him.

Gwen Stacy appears as a main character of the series and is viewed as a possible love interest for Peter Parker.

Gwen Stacy in The Spectacular Spider-Man.

Gwen Stacy's new appearance in the second season of The Spectacular Spider-Man.

Peter finally confronts Gwen about their true feelings for each other.

Peter and Gwen about to kiss...

Until Gwen stops the kiss.

Gwen and Peter decide to officially end their relationships with Harry and Liz before they can truly be together.
Add a photo to this gallery 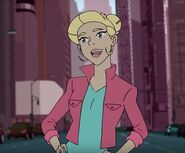 Gwen in Spider-Man 3
Add a photo to this gallery
Retrieved from "https://loveinterest.fandom.com/wiki/Gwen_Stacy?oldid=81545"
Community content is available under CC-BY-SA unless otherwise noted.