Start a Wiki
Ginny Weasley is the love interest of Harry Potter and the sister of Ron Weasley from the Harry Potter film series.  Ginny developes a crush on Harry from the moment she first meets him, in the first book, and from the way she talks about him, it seems that she had a crush on him before she even met him, from seeing his picture before.

In the second book, Ron tells Harry that she's been talking about him all summer. In the first couple of books, Ginny simply has a crush on Harry, and gets very nervous around him, while Harry does not return the feelings for her, but still likes her as a friend.

However, in the Order of the Phoenix, Ginny becomes less nervous around Harry, and even starts to date other boys. This possibly causes Harry to become interested in her, and in the sixth book, Harry has a big crush on her, while Ginny was dating Dean Thomas. Harry feels jealousy every time Ginny is with Dean, but worries that if he dates Ginny, Ron won't want to be his friend anymore. However, after Ginny and Dean break up, Harry can't control himself, and kisses Ginny. The two begin to date, and Ron gives Harry a look that says "if you must". Ginny helps Harry with his problems, and comforts her after Dumbledore's death.

At the end of the sixth book, Harry is forced to break up with Ginny, due to fear of what Voldemort would do if he found out Harry had a girlfriend.

Since the two still love each other, they did not interact much at the begginning of the seventh book. However, on Harry's birthday the two do kiss. While Harry is on his mission to kill Voldemort, he misses Ginny, and wishes he could be in Hogwarts with her.

Harry eventually ends up in Hogwarts and reunites with Ginny. Harry makes sure Ginny is safe during the battle, while he tries to stop Voldemort. Ginny witnessed Harry's final defeat of Lord Voldemort and sat with her head on her mother's shoulder during the victory celebrations in the Great Hall. The two presumably resume dating then.

Ginny and Harry eventually get married in the epilogue of the final chapter of the series, and have three kids, James Sirius, Albus Severus, and Lily Luna. 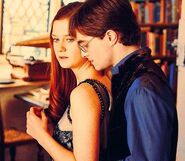 Add a photo to this gallery
Retrieved from "https://loveinterest.fandom.com/wiki/Ginny_Weasley?oldid=86966"
Community content is available under CC-BY-SA unless otherwise noted.