Fiona is friends with Pete's twin sister Linda Twist. Her personality isn't really explored much throughout the series, but she is generally considered one of the most popular girls in school and is well aware of Pete's crush on her. On the few occasions when she isn't portrayed as a love interest, she is shown to be politically active along with Linda, frequently protesting various events. 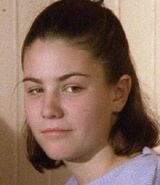 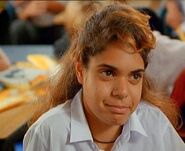 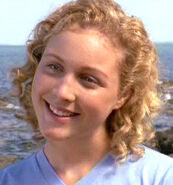 Girl-crazy Pete is always going out of his way to get with Fiona. Due to the abundance of paranormal activity in the local area, he's never short of some scheme to woo Fiona, only to create a major disaster that needs to be solved by the end of the episode. In the first series, Fiona catches on to this and tells Pete he doesn't need tricks to get a girl, he just needs to be sincere. She then gives him his first real kiss, and they are later shown having an on-and-off relationship for the next two series.

In the fourth series, Pete and Fiona have decided to see other people (she dumped him, obviously). Pete tries chatting up other girls, but obviously wants to get back with Fiona. In her last appearance, Pete is begging her to take him back.

Gribble, the local bully, has a crush on Fiona and frequently fights with Pete over her. Fiona is clearly not interested, as his father is a greedy tycoon who has plans to demolish various landmarks and ecosystems to line his pockets. While Pete tends to have short-lived success, James is always doomed to fail.

Jeanie was a dryad (tree spirit) that fell in love with Pete. Fiona was clearly irritated that Pete had moved on from her to a total stranger. It was revealed that kissing her underneath a tree he had urinated on caused Pete to become pregnant with her child. After three days of gestation, the baby tree spirit came out of Pete's mouth and went with Jeanie. Jeanie was never seen again after this, presumably because Pete didn't want anymore nasty surprises.

After Pete was bitten by a flea that would turn him into a dog during a full moon, he developed an attraction to Fiona's dog Ms. Oftenbark. The attraction was strong enough to make him want to stay a dog forever, but after seeing Ms. Oftenbark sharing a bone with a Schnauser, he was left broken-hearted.

Pharade was a shape-shifting frog-witch who was protesting Gribble's plans to drain the local lake and kill the native frogs. Pete was instantly taken in by her beauty and resolved to help her, albeit in a shallow, sycophantic manner. When Pharade's glamour began to wear off, Pete was creeped out by her increasingly slimy, green complexion. When it seems like Gribble is going to destroy what's left of the lake, Pete comes through in the end and amasses an army to take Gribble down. Pharade then reveals her true self to Pete and they go their separate ways.

Ariel was the princess of Atlantis. She had spent the majority of Series 4 watching Pete and the others from a distance, though its not revealed why until the final episode. She approaches the Twist family and tells them that she's been looking for a suitable partner, which she has concluded Pete is. Pete and the others are then offered the chance to come with Ariel to Atlantis and leave their world behind. After much thought, Pete decides that the lighthouse that he had been living in was where he belonged and declined her offer.

Retrieved from "https://loveinterest.fandom.com/wiki/Fiona_(Round_the_Twist)?oldid=8139"
Community content is available under CC-BY-SA unless otherwise noted.