To be with Hayato (succeeded)

Princess Love Interest
Emilia Gudenburg is the deuteragonist of the anime and light novel series, Hundred. She is a student at Little Garden and is member of the Selections. She is also the third Princess of the kingdom of Gudenburg and is the main love interest of Hayato Kisaragi.

Although she is a girl, Emilia disguises herself as a boy and reveals a rough, tough, headstrong, confident and strong person, greatly displaying a tomboy personality. Emilia is kind and caring towards her friends and also displays her strong protectiveness of them and to stand up for what is right, greatly proven as she defended two female students from being threatened expulsion from Claire. Emilia also enjoys battles clearly shown as she easily becomes excited and isn't afraid to fight against any opponent she faces, including Vice President of the Student Council, Liddy Steinberg. However, while Emilia is tomboy, she also displays a sensitive and girlish side to herself as she enjoys being more feminine around Hayato and isn't afraid to express her great love and affection for him even when disguised as a boy. Emilia makes her feelings of love for Hayato clearly shown and well known to everyone around them, not afraid to express her feelings even when rumours begin to spiral about their relationship, believing both Emilia and Hayato to be gay since her true identity and gender have yet to be revealed. Emilia also displays a jealous side to herself, becoming greatly annoyed when she witnesses Hayato together with other girls, mainly Claire and Sakura.

Hayato Kisaragi is the main protagonist of the series and is Emilia's main love interest. Originally, Hayato and Emilia met sometime in their childhood living in Gudenburg and became childhood friends. However, Gudenburg was attacked by Savanges and while trying to escape, Emilia was badly injured and Hayato helped to save her life by sucking her blood. Emilia was saved, but both her and Hayato became Variants. Since then, Hayato and Emilia have been separated from each other and Emilia has been in love with Hayato ever since. While knowing that the Savage virus that affected them is potent as many people die from being inefected, Emilia held great confidence that Hayato survived and knows someday she will see him again. Eventually, Emilia and Hayato are reunited years later when both begin to attend Little Garden. Emilia is happy of their reunion, but keeps her identity as well as their history a secret from him. When Hayato is forced to duel with Student Council President Claire Harvey, Emilia has great confidence in Hayato and helps him prepare for his match, greatly believing he can win due to his high comparability with a Hundred. While Hayato loses the match, he is able to prevent Emilia as well as two other students from being expelled and becomes roommates with Emilia. They soon begin to develop a strong and close friendship and Emilia's feelings for him increase further throughout the series.

Despite pretending to be a boy, Emilia acts very affectionately with Hayato and isn't afraid to reveal how she truly feels about him. When her true identity and gender are revealed to Hayato, she further expresses her feelings for him and isn't bothered by the rumours regarding their relationship. Due to Emilia keeping her true gender a secret, everyone at Little Garden suspects that Hayato and Emilia are gay and are in a relationship. Eventually during their first mission together, Hayato learns of Emilia's true gender and identity, finally remembering their past together. Emilia helps Hayato to learn more about being a Variant since he remained unaware his whole life until his recent fights against Claire and their mission. She helps Hayato to learn self control when his Variant powers begin to activate and has even shared several kisses with him, since it helps to deactivate the power. Emilia is also especially protective of Hayato either during serious battles that threaten his life or when he is being harassed.

Since learning of Emilia's true identity as a girl, Hayato and Emilia begin to grow more closer and eventually, Hayato falls in love with Emilia and have even gone on a date and Hayato personally bought her a necklace. While Hayato is aware of his romantic feelings for her, he is still somewhat shy and nervous to express them as well as being nervous when Emilia expresses her feelings for him, but gradually he grows more comfortable. However, they also face challenges as Emilia finds herself with two rivals for Hayato's love and heart in Claire Harvey, the Student Council President and Sakura Kirishima, a famous singer. Both girls have also fallen in love with Hayato and make their own efforts to have him for themselves. While Sakura remains unaware of Emilia's true identity and the nature of her relationship, Claire is aware of the truth and takes Emilia more seriously as a rival for Hayato's love and affections. Emilia is jealous wheneve either girl reveals or expresses her feelings for Hayato and always tries to keep them away from him.

Emilia also faces another ostacle that attempts to sepearate her from Hayato in any way possible in the form of her childhood friend: Claudia Lowetti. During an important mission, Emilia is reunited with Claudia who strongly wishes for Emilia to return to the kingdom of Gudenburg, but Emilia refuses and instead reveals she has no intention of ever returning to her kingdom. Upon learning of her relationship and love of Hayato, Claudia places him responsible for Emilia not returning, quickly strongly disapproving of their relationship and begins her attempts to separate them so Emilia can return. Claudia attempts to defeat Hayato in a duel and the winner will get Emilia, but she loses.

However, despite her loss and Emilia's wishes, Claudia refuses to give up. She makes her first attempt by trying to make Hayato look bad in front of Emilia in hopes of convincing her to return, but to no avail as Emilia is fully aware of Claudia's intentions. She makes her second attempt, noticing the relationship between Hayato and Claire, realizing Claire is in love with Hayato and attempts to push them together, thus is Emilia loses Hayato to Claire then it's another potential way for Emilia to return if Hayato is romantically together with someone else. She leaves Claire and Hayato together, hoping to bring them closer together and later informs Emilia that Hayato and Claire are on a "date". However, Claudia's attempts are hopeless as Emilia refuses to give up on Hayato even if he gets together with Claire and will not return to the kingdom due to a broken heart.

At first the two of them have a seemingly negative relationship with Claire threatening to kick Emilia out of the school in Episode 1. Getting a little better throughout the series the two of them still have a rather bad relationship, even though they trust each other in times of combat. One reason for such a rocky relationship can be their common love of Hayato, and being rivals for his heart. 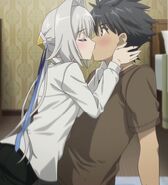 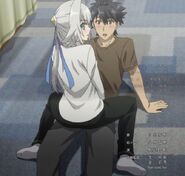 Retrieved from "https://loveinterest.fandom.com/wiki/Emilia_Gudenburg?oldid=90548"
Community content is available under CC-BY-SA unless otherwise noted.