Christine Daae is the love interest of the titular protagonist Erik (the Phantom) and also Raoul in every adaptation of The Phantom of the Opera. In the sequel Love Never Dies she is Raoul's wife while secretly being Erik's lover and having with him a son named Gustave.

The Phantom of the Opera

When she was a little girl, Christine's father passed away. Before he died, he told her that he would send her an Angel of Music to be her spiritual guide.

When Christine became a part of the Paris Opera, she was mentored by an unseen entity that she assumed was The Angel of Music. After the lead singer Carlotta was given a hoarse throat by this "angel", Christine was given her part. Her performance attracted the attention of her childhood friend Raoul, who decided to marry her.

Christine kept her relationship with Raoul a secret from the Phantom to avoid angering him, who would invite her into his secret lair as a way of earning her trust and attempting to make her fall in love with him. When Christine saw the Phantom's true form as a masked man, she was surprised at first, then scared after seeing his true face. The Phantom was consumed by jealousy when he found out about her relationship with Raoul, and demanded her to stay with him and be his wife after her next big performance.

Right after, the Phantom kidnaps Christine, so Raoul chases after them. The Phantom tortures him until Christine kisses him, giving the Phantom something he never had before: compassion and love. The Phantom is so touched by Christine's selfless nature and actions that he releases Raoul, deciding to let the woman he loves to be free to choose her life. Christine would later marry Raoul. 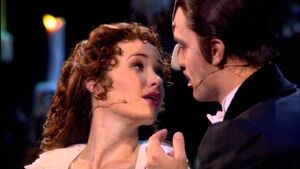 Christine and the Phantom in the stage musical adaptation. 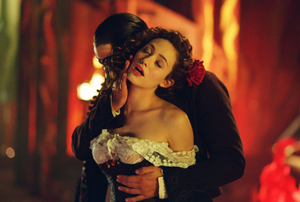 Christine and the Phantom in the 2004 movie adaptation.

Christine kissing the Phantom in the movie. 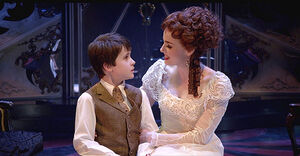 Christine with her and the Phantom's son Gustave in the Love Never Dies stage musical.

Christine kissing Erik in the Love Never Dies stage musical.
Add a photo to this gallery

The Phantom of the Opera 2004 movie

The Phantom of the Opera stage musical

The Phantom of The Opera
The Music of The Night
The Point of No Return
Final Lair
Phantom Comparison - The Kiss
Christine, I Love You - The Phantom Of The Opera (25th Anniversary)

Erik's facial disfigurement made him an outcast to the rest of the world. To alleviate himself from the pain of loneliness, he commited himself to the opera. When he came across Christine, he decided to teach her as a way of leaving his mark. After a while, Erik fell in love with Christine. His isolation had made him obsessive over her and he tried to drag Christine down into the depths with him, unable to comprehend her own freedom. But Christine showed Erik her kindness and love, he realized how wrong he was to hold her prisoner and sets her free.

In the Love Never Dies sequel stage musical, it is revealed that Christine had reunited again with the Phantom and they had a night of passion that resulted in her giving birth to their son Gustave. After meeting Erik ten years later, she finally decides to stay with him, but she tragically dies after being accidentally shot by her friend Meg. Christine dies in Erik's arms professing how much she loves him and asks him to take care of Gustave.

Christine and Raoul had known each other since they were children. Being from an aristocratic family, Raoul was determined to make Christine his wife. When he found out that Christine was too committed to her craft, he was angered and became aggressive towards her, but stopped when he found out about the phantom's hold on her. Even though Raoul was initially after Christine as a prize, by the end of the story he has proven both to Christine and himself that he does care for her.

Retrieved from "https://loveinterest.fandom.com/wiki/Christine_Daae?oldid=100306"
Community content is available under CC-BY-SA unless otherwise noted.