Start a Wiki
Chi-Chi is the love interest and later wife of Son Goku of the Dragon Ball   franchise.

11-year old Chi-Chi first met Son Goku when her father Gyu Mao sent him to get the Bancho-Fan, a magical fan that would put out the fire surrounding their castle. After Goku asked Chi-Chi if she was a girl in the most personal manner, she developed a crush on him, believing his advances to be a sign of affection. After the fire was extinguished, Gyu Mao offered Goku Chi-Chi's hand in marriage. Goku sees her again while Chi-Chi is picking flowers for their wedding and Goku gives her an apple to show that he loves her and Chi-Chi hits Goku on the back to show that she has romantic feelings for him.

Years later, at the age of 18, Chi-Chi entered the Strongest Under the Heavens tournament as an anonymous fighter. She wanted to surprise Goku, but as he didn't recognise her, she got angry and yelled at him. The two were matched up in the first round, in which Chi-Chi reveals herself to Goku and everybody including Bulma are shocked, except for Oolong. Son Goku beats her, but agrees to fulfill his promise to marry her. After defeating Piccolo jr., Chi-Chi and Goku get married and live in the mountains, where they have a son named Gohan, named after Goku's late adopted grandfather; and a second child named Goten a few years after that and a granddaughter named Pan in Dragon Ball GT.

Chi-Chi is the truest definition of a hothead. She's been known to beat up anyone who gets in her way and doesn't stop to consider any kind of consequences. She first showed her attitude at Maron after she insults her and makes fun of her. She also showed her attitude at Videl while Gohan is teaching Videl how to fly while her attitude finally catches up to her when Majin Buu turns her into an egg and smashes her for yelling at him. She obsesses over Gohan's future, ensuring that he studies science and math at the age of 4 so he can have an edge over other children his age. She takes a different approach with Goten, training him in martial arts, which shows that she's mellowed with age. After Goku and Vegeta returned to earth and Goku tells everybody that Old Kai granted him a life and Chi-Chi asks if they are going to become a family of four, Goku says yes as Chi-Chi breaks down crying and Goku comforts her, showing that she loves him and he loves her. During the party celebration for the defeat of Kid Buu while Goku hasn't shown up yet, she tells Bulma that she could trade mates with Goku and Vegeta, despite that Chi-Chi has romantic feelings for Goku and Bulma having romantic feelings for Vegeta. 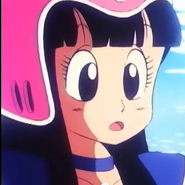 Chi-Chi as a child

Goku and Chi-Chi as kids 1

Goku and Chi-Chi as kids 2

Goku and Chi-Chi sparring as teenagers

Chi-Chi blushing after Goku confesses his love for her

Chi-Chi holding Goku's arm to show that she loves him

Goku and Chi-Chi on the nimbus cloud as teenagers 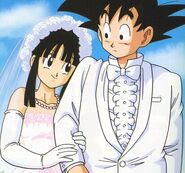 Adult Chi-Chi in the beginning of Dragon Ball Z

Chi-Chi in the Android saga

Adult Chi-Chi as she appears in the Majin Buu Saga

Chi-Chi and Bulma in the Majin Buu saga

Chi-Chi reuniting with Goku to return her feelings to him

Chi-Chi and Bulma thinking about Goku and Vegeta

Chi-Chi at the end of Dragon Ball Z

Chi-Chi with her son, Gohan and her daughter-in law, Videl in the final episode of Dragon Ball Z 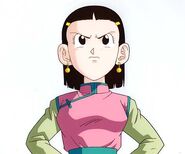 Chi-Chi as she appears in Dragon Ball GT

Chi-Chi as she appears in Dragon Ball Z: Battle of Gods
Add a photo to this gallery
Retrieved from "https://loveinterest.fandom.com/wiki/Chi-Chi?oldid=81863"
Community content is available under CC-BY-SA unless otherwise noted.