Gangster (Cultist stealing from the king to give to the poor in the manga).

To Become The Strongest In Universe 6

Caulifla is the possible love Interest of Kale in the Anime of Dragon Ball Super and possible love interest of Cabba in the Manga and maybe the Anime. She is a Saiyan from Universe 6 and a member of Team Universe 6 who participates in Zeno's Tournament of Power. She is the younger sister of Renso (former captain of the Sadal Defense Force).

Caulifla took Kale under her wing some time before the series began. Despite Kale's lack of confidence, Caulifla reckons she's got massive potential and always encourages her. The fact that Caulifla only ever seems to be this nice to Kale hints that she might have feelings for her.

Kale herself is completely devoted to Caulifla. She always fights by her side and takes any hits aimed at Caulifla despite her timidness. This fixation also has a negative side, as Kale grows insanely jealous of anyone who takes up Caulifla's attention and goes on a rampage. During the Tournament of Power this was something she learned to let go of because she saw that Caulifla was just having fun since she loves to fight.

In the anime it's implied that Cabba and Caulflia may have known each other. Since Cabba mentioned to Renso that they don't see eye to eye and he has trouble talking to her. Not much of it is addressed. However after Cabba teaches her earns her respect...and she cares about him to a point she's able to go to Super Saiyan 2 to protect him from a Kale's Berserk Super Saiyan transformation. Also mentioning that she doesn't feel anything romantic for Cabba when it was never brought up to begin with. So it's really hard to believe. She also has a lot of respect for him...as she was worried about him when she was facing Monna and wanted to take his place. Lastly she angry and wanted to avenge his defeat by eliminating Frieza. The way Cabba acts around her could be interrupted as a possible crush. Especially when Saiyan males are attracted to strong willed women. She also put his arm around him when their all revived and wants to start training together (all three of them) to become Super Saiyan 3.

The manga their relationship is different. Since they don't know each other. She steals from the Sadal Defense forces to help the poor Saiyans on the planet and is undefeated. Cabba is searching for warriors that can compete in the Tournament of Power. Due to requiring the Super Saiyan transformation, he's able to confront her and be the first to ever give her a defeat. Caulifla as a result appears to be develop a crush on Cabba. Noticeably when Cabba also brings Kale along for the Tournament of Power having take notice to her skills during his battle with Caulifla. She gets jealous and outright states, "Why are we bringing HER along?". More as if she expected them to be the only two Saiyans for the tournament...claiming she has promise but doesn't say much more than that. They fight together a lot during the Tournament of Power. Caulflia even reveals to him that she stole the Potara….and he sacrifices himself in the tournament to help her to put the other half of the earring on a berserk Kale (it's because she has so much power from the transformation and not because of Caulifla attention being taken away) so they can fuse. 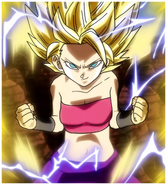 Caulifla holding Kale in her arms.

Add a photo to this gallery
Retrieved from "https://loveinterest.fandom.com/wiki/Caulifla?oldid=95284"
Community content is available under CC-BY-SA unless otherwise noted.