Spending time with her friends
Organising parties and special events

To help her friends stop any threat to them or Mystic Falls
to stop being second choice (ex. stefan)

Caroline Forbes is one of the main characters of supernatural romance drama series, The Vampire Diaries. She is best friends with Elena Gilbert and Bonnie Bennett. She is also a forced love interest of Stefan Salvatore and the former love interest of Matt Donavan, Tyler Lockwood, Klaus Mikaelson and Alaric Saltzman.

Originally, when she was human, Caroline was kind, caring and loyal to her friends. However, she was also shown to be rather selfish and self centred while having a lot of insecurities regarding herself. Caroline also has a bit of a sometimes difficult friendship with Elena. Caroline is jealous of Elena, believing she will always live in her shadow, causing her to become competitive, trying to out shine Elena. Caroline was also insensitive as she never considered other people's feelings when they were going through a difficult time in their own lives.

However, Caroline began to change once she became a vampire. Although Caroline had difficulty in the beginning when she became a vampire, she has since learned to control herself, displaying incredible skills of self control for her hungar of blood. She becomes much more confidant in herself as well as becoming more independent, strong, protective and responsible. Caroline has also become a better person, more kind, caring and considerate and is more sensitive to delicate matters. However, Caroline whether as a vampire or human, displays a judgemental side and can be biased as she strongly disapproves of Elena falling in love with Damon and instead encourages Elena to be with Stefan instead. Due to this, it causes Caroline to not consider others feelings again and instead tries to make everyone see the worst in a particular person. However, she eventually comes to overcome this, realizing her faults and wrongs and later comes to accept Elena and Damon's love for each other. Overall, Caroline is happier as a vampire, seeing she has now become a better person.

Caroline grew up in the town of Mystic Falls and is the daughter of Elizabeth and Bill Forbes. She has been best friends with Elena Gilbert and Bonnie Bennett since childhood and is also childhood friends with Matt Donavan, Tyler Lockwood and many others. Caroline is the captain of the Mystic Falls High School cheerleading squad and is the main organiser when working on school activities or parties. Although Caroline and Elena are friends, they sometimes share a hard friendship as Caroline believes she is caught in Elena's shadow and is known to be highly competitive and jealous of her.

In the beginning of the series, Caroline instantly developed a crush on Stefan and made several attempts to flirt with him. However, Stefan already holds romantic feelings for Elena and rejects Caroline much to her annoyance. Aside from her crush on Stefan in the first season, there isn't much interaction between as Caroline later begins a relationship with childhood friend, Matt Donavan. In the beginning of the second season, Caroline and Stefan begin to form a friendship when Caroline becomes a vampire. Stefan helps Caroline through the process of becoming a vampire and eventually they both become personal confidants and eventual best friends. They begin to form a close friendship, similar to Stefan's friendship to his best friend, Lexi. Caroline is also a big supporter for Stefan and Elena's relationship, believing they are each other's soulmates.

However in the beginning of the sixth season, Caroline and Stefan's relationship becomes strained as prior to the beginning of the season, Stefan when leaves Mystic Falls without saying goodbye. Caroline becomes hurt upon learning Stefan has given up on trying to find a way to bring back Damon and Bonnie after their deaths and has completely moved on from his life while completely cutting ties with everyone.

Eventually in Season 8, Stefan becomes human. Caroline and Stefan are forced to get married in a ceremony performed by Stefan's Brother Damon, who happened to be a certified ordained minister, to lure out Katherine Pierce, her nemesis. But their marriage is cut short when Stefan sacrifices himself to save Mystic Falls and Kills Katherine Peirce once and for all, leaving Caroline widowed. Stefan is also Josie & Lizzie Saltzman step-father.

Tyler Lockwood was Caroline's main love interest throughout a majority of the The Vampire Diaries. Originally Caroline and Tyler didn't get along well as both has completely different personalities and interests. Both viewed each other to be jerks due to Caroline's insecurities and insensitivity and Tyler's reckless, rude and overall arrogant behaviour. In the first season there wasn't much interaction between them as Caroline was in a romantic relationship with Tyler's best friend Matt Donavan and throughout the season, Tyler and Matt had a rocky friendship due to Tyler's actions. Caroline tries to help mend their friendship and overtime they both reconcile.

In the second season, Caroline and Tyler begin to grow more closer as both experience changes in themselves as Caroline becomes a vampire and Tyler triggers the werewolf curse and becomes one himself. When Katherine compelled Matt and Tyler to fight resulting in the death of classmate Sarah, thus triggering the werewolf curse. Caroline tried to intervene and witnessed the curse being triggered and when the news of Sarah's death was revealed, Caroline covered for Tyler explaining what happened was an accident. Due to this, Caroline and Tyler begin to grow more closer, but Tyler becomes suscious of her motives and while orignally believeing she maybe a werewolf, Tyler learns her secret that Caroline is actually a vampire.

Caroline and Tyler begin to work together as they both learn about the circumstances taking place as the full moon quickly begins to approch. They discover shocking and ultimately terrifying news that the transformation into a werewolf is painful, causing Tyler to become extremely worried and scared. Caroline remains by Tyler's side throughout the entire ordeal, but Tyler is curious regarding her actions towards, but Caroline reassures she wants to be there for him during the situation as it's difficult to be alone. During Tyler's first transformation, Caroline stays by Tyler's side throughout the entire night, holding him in her arms and hugging him until she eventually must leave when he completely changes into a wolf. The morning after, Caroline and Tyler reunite and Caroline comforts a devasted Tyler, holding and hugging him in her arms. Tyler soon came to develop romantic feelings for Caroline and eventually results in the two sharing a kiss outside her house.

However, Caroline and Tyler's relationship becomes extremely strained when Tyler learns his uncle Mason is killed by a vampire and while originally believing Caroline may have caused his death, comes to learns there are more vampires in Mystic Falls. Upset to learn about Mason's fate and hurt and angry that Caroline didn't tell him the rest of the truth regarding vampires, sides with the werewolves who have come to investigate Mason's disappearance. When they learn about Mason's death, the werewolves capture and torture Caroline. When Tyler learns what happened he is shocked, but during a confrontation between the vampires and werewolves while rescuing Caroline, Tyler does nothing, almost letting the werewolves kill Caroline and the others. Thankfully they are saved by Jones, a witch allied with Elijah. However, a devasted and traumatised Caroline is furious with Tyler and his betrayal and breaks off their friendship. Tyler is now Jeremy Gilbert new best friend.

Klaus Mikaelson, the Original Vampire-Werewolf Hybrid harbours strong romantic feelings for Caroline and while she originally hates him due to all the horrible acts he has done, she gradually sees the good side of him, he keeps well hidden. Also, on the originals, she says he wasn't the villain in her story, and before he dies, they share a kiss and she says that she'll never forget him.

Matt Donavan was Caroline's original love interest in the early seasons of The Vampire Diaries.

Damon Salvatore is one of the main protagonist of the series and is Caroline's brother in law. In the first season after originally being turned down by his younger brother, Stefan Salvatore, Caroline turns her attention to his older brother Damon. In the beginning upon meeting Caroline, they began a "relationship" when in reality, Damon began using Caroline to spy on Stefan for his plans with his powers of compulsion and often feed from her. Damon later releases Caroline and she begins a relationship with Matt. Since then, Damon and Caroline share a tense/hateful relationship throughout a majority of the series. When Caroline becomes a vampire in the second season, she remembers all of Damon's horrible actions towards her and almost attempts to seek revenge against him. The relationship between them doesn't improve, but slowly as they series progresses, they become frenemies, but still remain hostile towards each other. Caroline remains distrustful, disgusted and hateful towards Damon while Damon views her to be an annoying control freak. Despite their mutual dislike of each other, Damon became close friends with her mother, Shrieff Elizabeth Forbes.

Caroline is also highly against of the growing romantic relationship between him and Elena. In the fourth season shortly after Stefan and Elena break up, Caroline is shocked upon learning the reason is that Elena finally begins to truly and fully realize her romantic feelings for Damon. Gradually though as the series progresses, the relationship between Damon and Caroline improves as Caroline comes to forgive Damon for his actions and they become closer when her mother dies in the sixth season. By the end of the series, Damon and Caroline become close friends and brother/sister in law after Caroline marries Stefan towards the ending of the series.

Jesse was Caroline's ex in the beggining of the season 5.And Elena killed him

Alaric Saltzman is one of Caroline's Close friends and Ex-Fiancé. she unexpectedly becomes pregnant and becomes a surrogate mother to his twin Daughters Josie and Lizzie Saltzman. who are considered miracles since vampires cant procreate.

They only shared a kiss 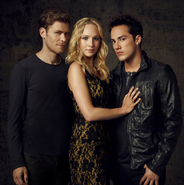 Retrieved from "https://loveinterest.fandom.com/wiki/Caroline_Forbes?oldid=94443"
Community content is available under CC-BY-SA unless otherwise noted.