Bulma is Goku's oldest friend since Goku first met her in the first episode of Dragon Ball. Unlike the other Dragonball characters, Bulma's major characteristic is not her strength, but her intelligence. She was able to construct a dragonball-radar, a shrinking device and a time-machine.

Bulma is one of the more hot-headed characters. She'll charge into any scenario purely for the thrill of it and is not afraid to tough-talk Vegeta, who is usually left speechless as a result. Bulma can also be extrememly shallow. She's well aware of the effect she has on men and has no problem with lusting after handsome men even while she's in a relationship or if they're bad guys.

Bulma is one of the more fashion-conscious characters in the series, frequently changing her hairstyle and outfit with every single appearance. She shares this trait with her ex-boyfriend Yamcha, Son Gohan and Android 18. She is also shown to be friends with Chi-Chi and Videl.

Bulma and Yamcha first met when they were 16-years-old. Bulma first saw Yamcha while he was fighting Goku and she was instantly smitten with him for his good ooks. Yamcha in the battle they hand reacted with embarrassment and ran away due to his fear for women. Eventually, Bulma gave up on using the Dragon Balls to wish for the perfect boyfriend and Yamcha to wish for his fear to go away once they realized they had each other. They become a couple and quickly fall in love. However, their relationship suffers from problems almost immediately; Yamcha spends long periods of time away to train and have no contact with Bulma, who accuses him of neglecting her feelings. In bouts of anger, Bulma tended to lash out at Yamcha and emotionally mistreat him, often blaming him for the cracks in their relationship. Although Yamcha was dismayed by how she treated him, he also said he still loved her and was willing to continue the relationship.

They break up several times and get back together throughout their 15 year relationship. Both were interested in marriage and having a family. However, while Yamcha was more interested in this, Bulma had mixed feelings due to their frequent break-ups and his tendency to flirt with other women. By the time the Saiyan Saga takes place, they are separated but a heartbroken Bulma confesses she wanted to marry him after he dies fighting the Saiyans. After his resurrection, they reconcile but they again have problems once Vegeta starts living with her and Bulma shows less interest in Yamcha. Three years after getting back together, they finally break up for good, as Bulma had grown tired of tolerating his unfaithfulness and she pursues a relationship with Vegeta, by whom she bears a son named Trunks. Yamcha was resentful of this but learned to accept it all by forgiving Vegeta and Bulma for their affair.

Despite this, they remain close friends and he becomes a good family friend, especially as Trunks grows older and Bulma and Vegeta's daughter, Bulla, is born. Bulma tends to tease him by flirting with him in a friendly manner and Yamcha always offers to comfort her when needed, such as when he comforted her when she despaired over Vegeta's death in the battle with Majin Buu. Overall, they were each other's first love but are more content as close friends.

Vegeta and Bulma first met in Planet Namek but didn't talk to each other, as Bulma was scared of him and all Vegeta cared about was finding the Namek Dragon Balls but he found her to be very beautiful. Their first impression of each other was not good; Vegeta threatened to kill her if he didn't get the Dragon Ball from her and she preferred Zardon to win against Vegeta, who labeled her an idiot. After Frieza was defeated, Bulma stopped seeing Vegeta as an enemy due to him helping Goku, Gohan, and Krillin fight Frieza. She was willing to put up with him by offering him live with her on the condition he doesn't touch her, and he reluctantly accepted but left soon after to find Goku. During his absence, Bulma began exhibiting an interest in Vegeta after having a dream about him and her feelings for him only grew to deep care and concern after his return and he over stressed himself in training to surpass Goku. Although irritated by her overbearing attitude, Vegeta often submitted to her demands, as he later says such traits are sources of attraction to Saiyans.

Four years after they met, Bulma breaks up with Yamcha and begins an affair with Vegeta, ultimately resulting in her becoming pregnant with his child and giving birth to Trunks. However, having a child together fails to bring them closer together; Vegeta was more focused on surpassing Goku than Bulma and their son, and exhibited little to no care for them. Bulma later said they are not a couple but strongly hints she is open to a relationship with Vegeta if he feels the same way, even though she often calls him a jerk and is dismayed by his disinterest in their son. After the Cell Games, Vegeta resolved to be a better person for the sake of his new family, leading to him and Bulma to reconcile and get married. During the seven years of peace that followed, Bulma truely fell in love with Vegeta, who secretly reciprocated her feelings but felt ashamed for giving up his former warrior lifestyle for his family. Bulma was oblivious to this until he allowed Babidi to take control of him and reawaken his evil, causing him to nearly kill Bulma, who was left devastated by this betrayal. Ultimately, Vegeta later felt remorse for this betrayal and, as prove of his love for his family, he sacrificed himself to stop Majin Buu. When Bulma learned this, she was overcome with despair. Similarly, when he learned Majin Buu killed her, Vegeta was overcome with sadness and rage, and wanted to avenge her. Upon his resurrection and the defeat of Majin Buu, Bulma was overjoyed so much she admitted she loved Vegeta and immediately forgave him. Afterwards, they became more comfortable with showing each other deep care and affection, although Vegeta remained reluctant to do so in public. Six years later, they have a second child, a daughter named Bulla.

As a married couple, although their personalities are polar opposites, they have a strong unanimous relationship and their marriage turned out to be a happy one. Vegeta is often absent training and is reluctant to do certain family activities, although he often ends up doing them at Bulma's order. Bulma tolerates his absences but supports his desire to train to push his limits and protect the Earth. Arguments are frequent between them but they are very devoted to each other. In fact, Goku pointed out that Bulma had become a motivation for Vegeta, after Vegeta flew into a heated rage and attacked Beerus for slapping Bulma. 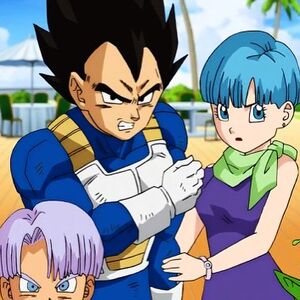 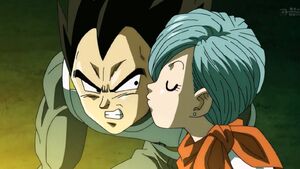 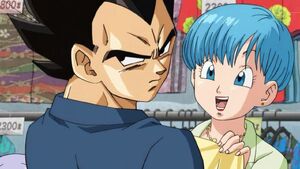 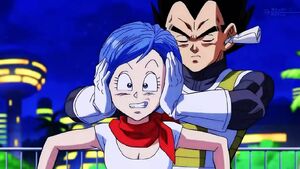 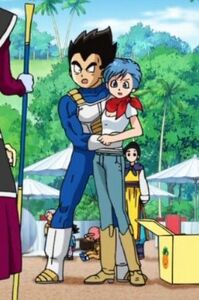 Goku and Bulma first met in Mountain Paoz when he was 12 and she 16. Goku was amazed to see she was a girl because she was the first human he had contact with other than his late grandfather. Bulma wanted his Dragon Ball to make her wish for a perfect boyfriend and offered Goku to feel her underwear in exchange for the ball but Goku refused. The two then decided to travel together to search for the remaining Dragon Balls. The two quickly became friends although Bulma was dismayed by Goku's lack of intelligence, carefree attitude, and unintentional perverted tactics towards her (seeing her bathing and taking off her underwear). Once Goku became an adult, Bulma was amazed how tall and handsome he had become and stated that she could have fallen for him. When Goku became engaged to Chichi, Bulma was surprised but happy for Goku. Chichi later said she believed Bulma always liked Goku, despite the former's denials.

Throughout their friendship, Goku and Bulma stayed close friends and acted as confidants in difficult moments. However, Goku has always harbored a deep fear towards Bulma's temper and tends to get more afraid of her than a powerful foe.

Under Chapter 200 of the manga Dr. Slump, Akira Toriyama reveals a secret saying that his editor Kazuhiko Torishima wanted that Goku and Bulma to fall in love.

Retrieved from "https://loveinterest.fandom.com/wiki/Bulma?oldid=97519"
Community content is available under CC-BY-SA unless otherwise noted.