Blackarachnia started out as a Predacon, while being formed by Tarantulas in the Beast Wars, and battled the Maximals. She first meets Silverbolt after he rescues her. His nobility and sense of chivalry both annoys and draws her to him. By the climax of Season 2, circumstance leaves her no choice but to throw her lot in with the Maximals and reluctantly join them. She also gained a Transmetal 2 look. After the defeat of Megatron, she and the other Maximals head back to Cybertron aboard the Autobot Shuttle, The Ark as the Beast Wars was finally over. The Maximals finally got back to Cybertron when the Maximal team was gassed by green gas, and her Transmetal 2 powers faded away and her memories were erased, along with Optimus Primal, Cheetor and Ratttrap, and Rhinox and Silverbolt have disappeared and have been mind controlled by Megatron who has also been gassed after breaking himself free from the Ark and became a machine drone as well as taking control of Cybertron.  She, Optimus, Cheetor and Rattrap have found themselves in their original organic beast modes from Beast Wars Season 1 and are being hunted down by hostile machine drones called Vehicons. Unable to transform out of beast mode, the four remaining Maximals fell into the chamber of the Oracle which allows the Maximals to be reformatted in order to survive Cybertron and the Vehicons. After Optimus was reformatted into a technorganic gorilla, she, Cheetor and Rattrap, were the rest to be reformatted, as she became a technorganic spider. In her robot form, she has eight eyes instead of two as she battles the Vehicons along with Optimus, Cheetor, Rattrap and Nightscream (the only survivor of Cybertron). She and the other Maximals had discovered that Megatron had won the Beast Wars. Later on, she sees Silverbolt in Jetstorm's body after some green ooze splashed on Jetstorm's chest. However, she allows Jetstorm to revert back into Silverbolt after allowing Jetstorm to fall into the green ooze, with a new technorganic body. She and the other Maximals sparks were stolen by Megatron, who is in Optimus Primal's "Optimal Optimus" body from Beast Wars Season 3. It was then Optimus had to sacrifice himself, along with Megatron in order to save the Maximals and reformat Cybertron into a technorganic planet. By the end of the Beast era, harmony is finally restored as she and Silverbolt are finally able to be together.

Blackarachnia being saved by Silverbolt

Blackarachnia as she appears in Beast Wars Season 3

Blackarachnia and Silverbolt after being freed from Megatron's mind control 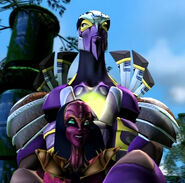 Blackarachnia and Silverbolt finally together
Add a photo to this gallery
Retrieved from "https://loveinterest.fandom.com/wiki/Blackarachnia?oldid=92165"
Community content is available under CC-BY-SA unless otherwise noted.