Black Cat (real name Felicia Hardy) is a renowned cat burglar and the third love interest of Spider-Man in the Spider-Man comic and television series.

Black Cat appears as a recurring character of the series and unlike her comic book incarnation, she is portrayed as a hero. She is introduced as Felicia Hardy, a wealthy young woman and Peter's university classmate. Originally, she is the first love interest of Peter Parker, having an on-again off-again attraction with Peter, but their realtionship never appeared to develop any further and soon she is later replaced by Mary Jane Watson as Peter's primary love interest. However, Felicia is still considered one of Peter Parker's major love interests of the series. Aside from Peter, she also developed a brief romance with Flash Thompson, but the relationship didn't last.

In the second season, Felicia begins a romantic relationship with Micheal Morbius, a scientific foreign exchange student. While Felicia isn't interested in Michael during their first meeting, she soon gives Michael a chance, allowing him to be her date at an Science event at one of her mother's parties. Felicia and Michael quickly fall deeply in love with each other, soon forming a serious and strong relationship. However, their love is threatened when Michael steals a vital of Peter Parker's mutating blood and after being bitten by a bat, Michael is transformed into a vampire. Spider-Man attempts to help Michael, but the situation and Michael's condition quickly worsens. When Michael mysteriously disappears the hospital, but secretly transforms once again into a vampire, he leads everyone to believe he has been kidnapped by Spider-Man. Felicia is devastated and blames Spider-Man, believing he has kidnapped Michael after witnesses saw the previous struggle between the pair when Spider-Man was in reality saving Felicia from being attacked by Michael. Eventually, Felicia learns the devastating and heartbreaking truth about Michael when he kidnaps and attempts to transform her into a vampire in hopes they can be truly together. Felicia is saved, but is left heartbroken of what has become of Michael and is left comforted by Spider-Man.

Over the course of the series, Felicia grows to develop a close bond with Spider-Man during the many times he has saved her life and has been there for her in hard times. Felicia grows to develop an attraction to him, which deepens more over time than she realizes. Eventually, Felicia grows out of her obliviousness, realising she has actually fallen deeply in love with Spider-Man. In the third season episodes, "Enter the Green Goblin" and "Rocket Racer", Felicia finally confesses her love for Spider-Man, inviting him to her apartment and kisses him in thanks for everything he has done for her. Despite his feelings for Mary Jane, Peter/Spider-Man is revealed to still be attracted to Felicia, but despite their strong and mutual romantic feelings for each other, he refuses to enter into a relationship in fear of her safety. Felicia understands and respects Spider-Man wishes and attempts to move on, beginning to date Jason Philips. They later become engaged, but the engagement is broken off upon learning the shocking truth that Jason is the Hobgoblin, breaking Felicia's heart once again, but is comforted by Spider-Man.

In the fourth season of the series, upon transforming and becoming the Black Cat, she teams up with Spider-Man and becomes his partner while both remain unaware of each other's true identities. During their time together, their partnership quickly develops into a romantic relationship when she expresses her long time love for Spider-Man. Orignally, Spider-Man is reluctant and unsure of his feelings for Black Cat, still feeling the loss and guilt of losing Mary Jane who had mysteriously disappeared. Eventually, he comes to realize he has undeniably fallen deeply in love with her, strongly shown and displayed as he enjoys working together with her and ultimately finds Black Cat to be an incredible person. However, their relationship is short lived when Black Cat decides to leave to travel with her former love, Michael and vampire hunter, Blade to fight against a greater evil. Black Cat and Spider-Man ultimately say goodbye, but not before sharing one last kiss and Black Cat declaring her love to Spider-Man.

In the fifth and final season of the series, Black Cat briefly returns as both Felicia Hardy and her alter-ego and attends the wedding of Peter Parker and Mary Jane Watson. She soon reappears as Black Cat helping Spider-Man save the wedding when it suddenly becomes under attack. Black Cat later offically reunites with Spider-Man while admitting she still loves him and desires to renew their love, but Spider-Man rejects her since he has recently become the husband of Mary Jane. Shortly after, Black Cat returns to work alongside Micheal and Blade to hunt down vampires and Peter discovers much to his shock that he married a clone of Mary Jane and the real one is still missing. Towards the ending of the series, Spider-Man recruits Black Cats help in fighting a war to save the multiverse. While she is orignally angry with Spider-Man for taking her away from Earth, she is greatly pleased to be working alongside the worlds greatest heroes and admits she is happy to be with Spider-Man once again, admitting she still loves him they than shared a kiss happily.

Black Cat appears as a minor recurring character of the series.

Felicia, will have a hard time accepting that Peter is with MJ, and will end up intertwining a relationship with his best friend Flash Thompson for the sole purpose of hurting him to make Peter sick. Over time the cat will let go of these petty revenge, and will once again have a friendly relationship with Peter, despite the fact that it is clear that she still has feelings for him.

Eventually she and Flash will break when he discovers his double life. Felicia was disappointed when Peter was unmasked during the civil war, because knowing her identity made her feel like they still had a special bond.

Felicia Hardy as The Black Cat

The growing romantic relationship between Black Cat and Spider-Man.

Spider-Man comforts Felicia over the tragic fate of Micheal Morbius. 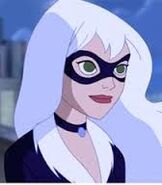 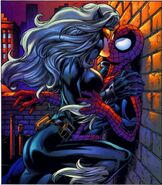 Retrieved from "https://loveinterest.fandom.com/wiki/Black_Cat?oldid=93509"
Community content is available under CC-BY-SA unless otherwise noted.