Isabella "Bella" Hartley is one of the new main characters introduced in the final season of H20: Just Add Water. She is best friends with Rikki and Cleo and is the lead singer of a local band known for performing at Rikki's Cafe. She is also the main love interest of Will Benjamin.

Will Benjamin is a new main character introduced in the final season and Bella's main love interest. Since they first met, Bella and Will both develop strong romantic feelings for each other and their relationship grows closer throughout the season to the point where Will comes to learn Bella and the girls secret. While Bella and Will's feelings are mutual, both are unaware of how the other feels as they are too nervous to confess their true feelings for each other despite the fact, almost everyone is aware of their love for each other. However, Bella and Will's relationship faces difficulty due to Will's older sister, Sophie as she openly reveals her dislike of Bella and disapproves of the relationship between them. Aside from Sophie's occasional interference, Bella and Will face another problem. Shortly after Bella reveals her secret about being a mermaid to Will, she begins to believe that Will only likes the mermaid side to herself and thus doesn't really have any feelings for her. Upset and hurt, Bella tells Will to stay away from her.

However, their friendship is restored when Will works together with Bella and Cleo to save Rikki after learning that Rikki and Cleo are also mermaids. Throughout the season, Bella and Will's friendship and relationship grows stronger, including their love for each other. Bella and Will both care deeply about another and are there is they are facing problems or difficulties when Bella noticed that Sophie was pushing Will too hard on his training or when Will began helping Bella to find the cause of her allergies. Eventually, Bella and Will finally gain the confidence to confess their feelings at the End of the School Year Beach Party. However, they face a serious problem that nearly destroys their relationship. Will is nervous to ask Bella to the dance and practices on Rikki and in the process, confesses his feelings for Bella to Rikki. However, unknown to either of them, Bella overhears them and becomes heartbroken, believing Will and Rikki are in love. Due to this, Bella attends the dance with Nate, much to Will's heartbreak and he goes with Rikki.

However, at the dance, Rikki's ex-boyfriend Zane is jealous, believing Will has feelings for Rikki and is trying to have her for himself, resulting in a fight. Will denies having feelings for Rikki and instead finally confesses to everyone he is actually in love with Bella. However, Bella is force to leave the party when she is splashed with water. Will chases after Bella and upon reuniting, Will apologizes to Bella and both finally and properly confess their feelings for each other and share their first kiss. Since then, Bella and Will became a couple and are happily together.

Nate is a reccuring character of the series and Bella's fellow bandmate. Since Bella began performing with Nate's band at Rikki's Cafe, Nate instantly developed romantic feelings for her the moment he saw her. Nate make several attempts to win Bella, but she doesn't return his feelings as she already harbours strong romantic feelings for Will. However while Bella doesn't return Nate's feelings and although she can be annoyed by his behaviour at times, they do appear to be friends and have a good friendship as they work closely alongside each other in the band. 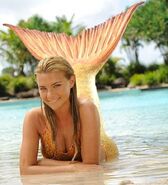 Bella and Will share their first kiss, finally confessing their feelings for each other.

Retrieved from "https://loveinterest.fandom.com/wiki/Bella_Hartley?oldid=81733"
Community content is available under CC-BY-SA unless otherwise noted.