Bea Goldfishberg is the love interest of Oscar from the TV show, Fish Hooks. She is also one of the three main protagonists of the show along with Milo and Oscar. Oscar has a crush on her and does something nice to her and Bea sometimes does her own way as a good friend. In future episodes, she and Oscar are currently dating and in "Fish Prom", she kisses Oscar on the cheek and hugged him after the two begin their first dance at the prom, showing that Bea has romantic feelings for Oscar and that she loves him as Oscar shows that he loves her. In the series finale of the show, she and Oscar share a blocked kiss as they became a couple after graduating from Freshwater High.

Oscar and Bea falling in love

Bea kissing Oscar to return her feelings to him

Bea leaning on Oscar's shoulder while watching a band with him 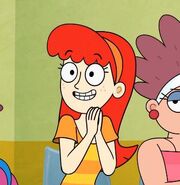 Bea as a human

Bea and Oscar's kiss in the series finale of the show
Add a photo to this gallery
Retrieved from "https://loveinterest.fandom.com/wiki/Bea_Goldfishberg?oldid=57346"
Community content is available under CC-BY-SA unless otherwise noted.