Batgirl is the love interest of Dick Grayson, the first Robin, later Nightwing and at one point the second Batman in the Batman comics. Dick Grayson and Barbara Gordon had an on/off relationship. They did get engaged but Barbara ended it. In the New 52 it has been confirmed that Dick and Barbara have feelings for each other.

In Bruce Timm’s non-canon universe Batgirl also had a relationship with Bruce Wayne/ Batman. In the much maligned movie adaptation of the Killing Joke, there is a non-canon scene in which they did have sex. In this universe they have also dated. This was confirmed in Bruce Timm’s Batman: Beyond.

The relationship between Batman and Batgirl is not considered canon.

Her real name is Barbara Gordon, the daughter of Commission Gordon. She first appeared in Detective Comics #359 as a libarian. She helps Batman and Robin fight the rouges gallery in Gotham City. She has had feelings for Dick Grayson in the comics. Even after Dick started dating Barbara, the two have stayed friends.

Sometime after Dick became Nightwing, Barbara retired her Batgirl identity. Shortly afterwards, The Joker tracked Barbara down and damaged her spine, leaving her paralysed from the waist down. After the incident, Barbara resolved to not let this ruin her life and became a computer hacker known as The Oracle.

Dick Grayson and Barbara Gordon first met when Dick was just Robin and Barbara recently starting her job as Batgirl. The two only interacted as friends as well as partners, due to this Dick devolped a crush on Barbara.

Jason Bard has been another strong interest of Barbara post-Crisis on Inifinite Earths as well as during Rebirth.

Luke Fox is a super hero, son of Lucius Fox and a old friend of Bruce Wayne. In current continuity and DC Bombshells, they dated briefly. 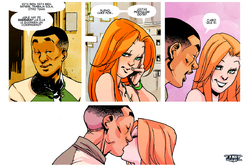 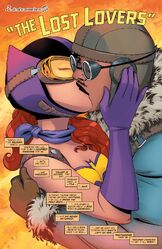 She appeared in the 1966 live-action Batman TV series where she is played by the late Yvonne Craig and had a similar role in the comics in Season 3.

Batgirl also appeared in The Adventures of Batman as she works in the District Attorney's office instead of being a libarian in the comics.  She also appeared in The New Adventures of Batman who served a major role in the cartoon.  Batgirl appears in Batman The Animated Series where Barbara decides to investigate dressed in a Batman-style costume and Robin tries to stop her but rips the back of the mask and revealing Barbara's flowing red hair.  Barbara then decides to redesign her costume to make it look different than Batman's.  Batgirl made her final appearance in the episode, "Batgirl Returns" where she begins a relationship with Dick Grayson which was also seen in Batman & Mr. Freeze: SubZero in which she appeared and was kidnapped by Mr. Freeze and Batman and Robin try to locate her and rescue her.  Batgirl also appeared in The New Batman Adventures where she is now voiced by Tara Strong and becomes a main character in the series and serves as Batman's main partner.  Her outfit was redesigned to look more like her classic comic book colors.

Batgirl also appeared in The Batman where she serves as Batman's first sidekick instead of Robin, who does not appear until Season 4 in Season 3 where she is originally called "Batwoman" which differs from the comics. She and Robin have a brother sister relationship, but Batgirl has feelings for Robin.

Batgirl also appeared in Batman: The Brave and The Bold where she and Nightwing team up with Batman in a few episodes.

Batgirl also appeared in Young Justice as a member of the team in Season 2 during the invasion saga and has teamed up with her best friend Wonder Girl to rescue the UN Secretary General Tseng from Lobo.

Batgirl appeared in Super Best Friends Forever as one of the lead characters and is a cheerful, go-getter to the rest of the group.

Barbara Gordon also appeared in Beware the Batman as a teenager and is good with computers and idolizing Katana in the show.

Batgirl also appeared in the Teen Titans Go episode, Staring at the Future where she is currently married to Nightwing after Nightwing finally stopped obsessing about Starfire while Starfire moved back to her home planet and Raven being reborn as energy to protect the universe.

Batgirl (aka Barbara Wilson) appeared in one film, Batman & Robin where she is played by Alicia Silverstone and is the niece of Alfred Pennyworth and has teamed up with Batman & Robin for the rest of the movie.

Retrieved from "https://loveinterest.fandom.com/wiki/Batgirl?oldid=99019"
Community content is available under CC-BY-SA unless otherwise noted.