Ayato Amagiri is the main protagonist of the anime and light novel series, The Asterisk War. He is a transfer student at Seidōkan Academy and is searching to find his missing older sister, Haruka. He is also the love interest of Julis-Alexia von Riessfeld.

Julis Riessfeld is the deuteragonist of the series and Ayato's main love interest and partner. Ayato and Julis first met one another during Ayato's first day at Seidoukan Academy. Ayato noticed a handkerchief fly out a window and upon receiving went up to the owner's room, intending to return it. Ayato and Julis first met, but Ayato accidently walked in on Julis changing, causing an embrassing and unintential moment. Ayato managed to return Julis' handkerchief and while she was grateful, she was ultimately furious of his actions, proceeding them to engaged in a duel, thus causing a rocky upstart to their relationship.

While Julis tries her best to hide how she truly feels, Julis' romantic feelings for Ayato are shown to be incredibly obvious. Julis' feelings are heavily proven due to her constantly blushing whenever they are together and becomes jealous whenever other girls show affection for him. Ayato cares a great deal about Julis, realizing his purpose is to protect her, but it's unknown if Ayato has romantic feelings for Julis. Eventually before fully realizing it himself, many people such as Julis' older brother, Jolbert and Strea mentor, Mother Therese easily realised Ayato's growing romantic feelings for her.

Saya Sasamiya is Ayato's childhood friend who harbours romantic feelings for him.

Kirin Toudou is a junior high school student at Seidōkan Academy who develops romantic feelings for Ayato when he protects Kirin from her abusive uncle.

Claudia Enfield is the Student Council President of Seidōkan Academy who develops romantic feelings for Ayato and isn't afraid to show her affection for him. 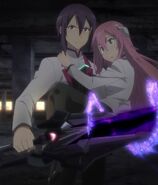 Until they are interrupted by the arrival of their friends.

Julis and Saya fighting over Ayato.
Add a photo to this gallery

Retrieved from "https://loveinterest.fandom.com/wiki/Ayato_Amagiri?oldid=90971"
Community content is available under CC-BY-SA unless otherwise noted.