Austin Ames (also known as Nomad) is one of the main characters of the romantic comedy, A Cinderella Story. He is the star quarterback of North Valley High School who dreams of becoming a writer and going to Princeton University. He is also the main love interest of Sam Mongomery.

While not much of Austin's history is known, Austin is the star quarterback of North Valley High School and is the most popular boy at school. He is also the boyfriend of Shelby Cummings, the most popular girl in school. Austin's father owns a car washing business and Austin works alongside his father who dreams of Austin playing professional football, further his sports career by going to the University of South California and eventually working alongside him to officially run the family business. However, in reality, Austin is unhappy with his life as he doesn't enjoy playing football, seeing his father is pushing his dreams into him and feels he can't truly express the person he actually is. Austin instead dreams of going to Princeton University and wants to become a writer, but he feels he must hide his true self from others and thus feels incredibly alone. A month prior to the beginning of the film, Austin has began an online relationship with a mystery girl only known as "Princeton Girl", unaware of her true identity as Sam Mongomery.

In the beginning of the film, Austin and his friends arrive at school and Sam views him to be the same as the rest of the popular clique, spoiled and selfish, still remaining aware of his true identity. Austin and Sam begin to text one another throughout the entire day, happily discussing their real problems and joking around, fully expressing their true selves through messages while expressing their romantic feelings for each other. By the end of the day, Sam and Austin are getting ready for bed, but before ending their chat, Austin messages Sam to finally meet face to face at the Homecoming Dance. The day of the dance, Austin, Shelby and their friends are at Fiona's Diner and Sam gets ready to take their order. While most of his friends mock Sam, Austin doesn't take part and instead laughs when Sam makes a joke about Shelby. Shelby begins to discuss the dance, but during the conversation, Austin requests they speak privately, but Shelby assures whatever he has to say, he can say infront of everyone. Austin breaks up with Shelby and reveals he loves someone else, but can't reveal their identity. Shelby refuses to break up and instead arranges to meet him at the dance, leaving Austin and his friends.

At the dance, Austin is dressed as "Prince Charming" while his friends are the "Three Musketeers". Sam makes her entranced dressed as "Cinderella" gaining everyone's attention, admiring her beauty, including Austin. He approaches her who mistakenly believes an acquaintance Terri is "Nomad" until Austin reveals his identity himself. Sam is shocked to learn that Austin is "Nomad", never imagining him and attempts to leave. Austin stops her and proves himself to be "Nomad".

Sam Mongomery is the main protagonist of A Cinderella Story and is Austin's main love interest. Before the events of the film, Austin began an online relationship with Sam, but both remain unaware of each other's true identities only referring to each other by their usernames, "Nomad" and "Princeton Girl". Sam and Austin develop a close relationship, constantly emailing and texting one another throughout all hours of the day and fully express their true selfs and problems. Austin begins to fall in love with "Princeton Girl"' seeing through her messages that she is a true real person, unlike any girl he has met before who cares for more important matters than clothes, beauty or social status. In reality, still unaware of the others true identity, Austin doesn't know Sam very well, almost seeing her as invisible while Sam believes that Austin is just like all the popular teens in their school. However, while she views him to be the same as others, Sam sees the good in him, voting for him as The Student Council President, much to her own surprise. Eventually, Austin decides he wants to finally learn their true identities and arranges for him and "Princeton Girl" to finally meet face to face at the Halloween Homecoming Dance.

Sam arrives at the Homecoming Dance as "Cinderella" and immediately catches everyone's attention, including Austin who instantly realizes she is "Princeton Girl". While Sam originally mistakes "Nomad" to be an acquaintance, Terri, Austin reveals his true identity, much to Sam's shock and disbelief and attempts to leave. Austin stops her from leaving, proving his identity as "Nomad", revealing several of the messages they have written to one another. Sam is shocked, imagining him to be someone entirely different, never imagining Austin Ames to be a closet poet and questions him about his relationship with Shelby, learning they broke up. Sam and Austin leave the party and take a walk outside where they play "20 Questions", but only get 10. Sam and Austin enjoy their stroll, learning more about one another while trying to guess "Princeton Girl's" true identity. Sam and Austin walk to the gazebo and share a romantic dance and nearly kiss. Austin attempts to remove Sam's mask, nearly revealing her true identity until her phone alarm goes off, warming her to return to the Diner before Fiona return. Austin attempts to go after her, but is briefly sidetracked when he and Sam are announced as Homecoming Prince and Princess. Ultimately, Austin loses sight of "Princeton Girl", only finding her phone she left behind.

Austin begins his quest to find out who she really is, putting numerous posters, asking who "Cinderella" really is and constantly emails her, but gets no response. Sam is unsure to respond to Austin's messages, believing if she reveals who she really is he won't like her. Later at Fiona's Diner, Sam and Austin begin to talk where Austin expresses his problems, revealing he can't express who he really is. Sam shares his views and begins to express herself and in the process, nearly confesses to Austin her identity as both "Princeton Girl" and "Cinderella" until they are interrupted by Fiona's arrival. Austin makes his exit, but not before he thanks Sam for the advice. Finally gaining the confidence, Sam decides to finally reveal herself to Austin. However at the School Pep Ralley, Shelby and Sam's step-sisters read the private messages between her and Austin while putting on a comedy skit, fully exposing Sam as Cinderella, while mocking her as phoney and wannabe. Sam is humiliated, but is even more hurt when Austin refuses to stand up for her, upset she didn't confess her identity.

Austin begins to feel guilty for what happened, but doesn't approach or speak with Sam after the events of the Pep Ralley. Austin attempts to email Sam, but can't find the words. Before the Homecoming Game, after finally regaining control of her life, finally freed of her step-family, Sam confronts Austin in the locker room for his actions, pointing out his cowardice and how he deeply hurt her at the events of the Pep Ralley, reminding him she was humiliated, not himself. Sam furthers expresses her disappointment, now believing Austin to be the very person she originally thought of all along and feels sorry for him despite her own problems.

Sam acknowledges that while the true Austin she knew may still be inside him somewhere, she isn't going to wait around for him. After finally revealing true feelings, Sam leaves the locker room as Austin calls out to her, but is forced to leave for game. Austin and his team proceed to play the Football Game while Sam and Carter watch from the benches. However, before the game reaches it's conclusion, Sam can't watch it any longer and begins to leave. Austin notices Sam leaving and finally realizing his mistakes, leaves the middle of the game and goes directly to Sam and kisses her. Rain begins to fall and Austin apologizes to Sam for his actions. Accepting his apology, Sam and Austin resume their kiss and finally become a couple. Since then, Austin and Sam are happily in love and are last seen driving off together to go to Princeton University.

Shelby Cummings is one of the main antagonists of A Cinderella Story. Originally, Austin and Shelby were in a romantic relationship, being highly well known High School Sweethearts to everyone. However, unknown to Shelby, Austin grew tired of her selfish, rude and inconsiderate behaviour and secretly began an online relationship with Sam Mongomery under the alias, "Princeton Girl". Eventually, Austin ends his relationship with Shelby, breaking up with her before attending the Halloween Homecoming Dance. Shelby refuses to accept their break up and decides she will meet him at the dance, but becomes annoyed when she notices "Cinderella" and Austin together. Shelby doesn't interfere in their relationship for a majority of the film as she becomes smitten with "Zorro" until discovering his true identity as Carter Farrell.

Shelby decides she wants Austin back and after getting information from Gabriella and Brianna, learning that Sam and Austin have been having an online relationship, including Sam is Cinderella, she decides to humiliate Sam at the Football Pep Ralley. Shelby exposes Sam's identity as Cinderella to the entire school while reading several of the emails between her and Austin. Sam is left devastated and incredibly hurt and Austin becomes annoyed she didn't reveal her true identity and doesn't stand up for her at the Pep Ralley, causing sever strain to their relationship. Shelby sees the wedge created between them and tries to further convince Austin that Sam isn't one of "them", referring to the popular clique. Shelby believes she has nearly won Austin back and confides in her friends at the Homecoming Game that she and Austin are close to being back together. However, after being scolded by Sam and realizing his mistakes, Austin leaves the middle of the Homecoming Game and reconciles with Sam while Shelby watches the two embrace each other. 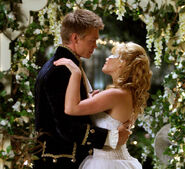 Retrieved from "https://loveinterest.fandom.com/wiki/Austin_Ames?oldid=93815"
Community content is available under CC-BY-SA unless otherwise noted.