Start a Wiki
Ashley Hammond is the love interest, later girlfriend, and later wife of Andros from Power Rangers in Space.

After the destruction of the Power Chamber, she, TJ, Carlos and Cassie left Earth for outer space in a NASADA space shuttle (excluding Justin who chose to stay with his dad), powerless but ready to fight to save Zordon.

She and the other Rangers meet Andros the Red Space Ranger on the Astro Megaship and the Rangers were given new powers as she became the Yellow Space Ranger and commanded the Mega V-4 (Saucer) Zord.

When the Space Rangers, headed back to Earth, she enjoyed showing Andros her hometown. She discovered that he was telekinetic after Andros telekinetically poured hot sauce in Bulk's milkshake. She teaches Andros how to play billards. She begins a romantic relationship with Andros.

On her birthday, the monster Body Switcher had managed to make Astronema look like Ashley and vice-versa. Also Andros gave her a necklace from KO-35 for her birthday and they shared their first hug.

Ashley escapes and warned her friends about Astronema looking like her. She eventually got her morpher back.

Ashley was very interested in learning how to use telekinesis and Zhane was happy to teach her. However their spending time together resulted in Andros believing there was something romantic between them, creating a void between the Red and Silver Rangers. But Zhane soon explained that he and Ashley were just friends and they repaired their friendship.

She and the other Space Rangers said goodbye to the Galaxy Rangers. This reveals that she is currently dating Andros. She serves as the primary love interest for Andros.

Ashley as she appears in Power Rangers Turbo 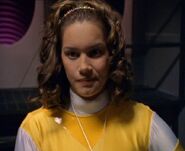 Ashley as the Yellow Space Ranger

Ashley falling in love with Andros
Add a photo to this gallery
Retrieved from "https://loveinterest.fandom.com/wiki/Ashley_Hammond?oldid=92857"
Community content is available under CC-BY-SA unless otherwise noted.