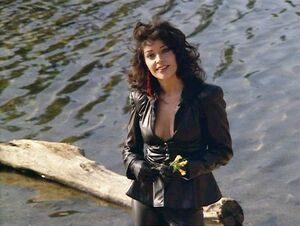 Apollonia is the love interest of The Kid in the 1984 music-drama Purple Rain. She's portrayed by Patricia Apollonia Kotero.

She's a singer and dancer from New Orleans. She heard of the famous Minneapolis club known as First Avenue and traveled to that city to get her stardom and there she met two talented men, one was Morris Day, the arrogant lead singer of The Time, the other would be the man she would ultimately fall in love with, The Kid, the lead singer and lead guitarist of The Revolution. Both turned her own, but The Kid made the first move. The next day, they met in a mall. He told him to give him her ankle bracelet. After which he walked away and she demanded he return it. Intitally he refused and asked her which she got it from. But then he stopped to check out a beautiful guitar he could not afford. He gave her back her jewelry and invited her to ride on his bike.

They drove out to a lake and she told him her brief life's story and told him she wanted to become a star. He told her that she needed to be initiated by 'purifying herself in the waters of Lake Minnetonka.' She stripped down to her black skimpy panties and was topless. She seductively approached him before turning around and she jumped into the lake as The Kidd was verbally trying to stop her. Once she got out of the water, he told her, that wasn't Lake Minnetonka and walked back to his bike. Mortified and upset, she gathered her clothes and screamed at him, demanding for him to tell her how many other women he done this too. He went back and told her he was impressed and that he might had not done it had he been in her position. After he played with her a bit more, she got onto his bike and drove back to town.

Later on, she went to First Avenue club where she had a meeting with Morris Day, though Morris tried to use that as an opportunity to seduce her. She was more amused at his sleazy attempts at seduction more than she was seduced. However, she was seduced by The Kid when he took the stage and sung the song, The Beautiful Ones. It brought her to tears. She would later on go to his house where they first made love. The Next day after he dropped her off at her hotel she stood at, she was met by Morris Day who was trying to seduce her, but then after she was showing she was growing tired of his advances, he turned the nature of the conversation to being strictly professional and told her that she would be great for this girl's group he wanted her to join as their lead singer. She asked for money so she could by The Kid that guitar he wanted.

Later on that night after The Kid had a bad night concerning his father, Francis L. abusing his mother, she came to his place, giving him the guitar, which for a moment brightens his night, until she told him she was working Morris' group. Out of a jealous rage, he smacked her hard on the face. She was understandably upset. After he told her that Morris was no good, she screamed out "YOU'RE JEALOUS!" before she stormed out of his place crying. He once tried to take Apollonia out of the rehearsal session she was having with her band, but he had to be escorted out. Later on, they, being Morris and Apollonia, for business reasons, went to First Avenue where they met up with the club owner. The Kid saw them together as he was performing Computer Blue and interrupted the song by screaming into the mic and he changed the song to Darling Nikki. The lyrics seemed to have upset Apollonia to the point where she ran out the club in tears.

Apollonia would later on with her group, Apollonia 6, would sing Sex Shooter in another club known as The Taste, not knowing The Kid was watching. Shortly after Morris and Apollonia would be alone in the streets, both drunk and celebrating her successful performance. The Kid would drive his bike towards them, kicking Morris to the ground and tells her to get on. She gets on and he drives off while Morris screams angerly at him, calling him a "long haired-faggot." Apollonia would get off after The Kid stopped. She took a sip of her drink from a flask after The Kid told her not too. This made the kid angry and slapped her and she slapped him back and she pushed her to the ground and was ready to hit her. She told him to go on and hit him. He got up and she got up after and stormed off after she took off and threw her jewelry he gave her to possibly signifying that they were done.

Apollonia wouldn't see The Kid again until she heard his father tried to kill himself. She would go to The Kid's house and help him clean up. She would witness The Kid performing Purple Rain and was like everyone else, including Morris Day, was moved by the powerful ballad song. And like everyone else, she congratulated The Kid. After which he returned to the stage and performed more with Apollonia showing support.

Retrieved from "https://loveinterest.fandom.com/wiki/Apollonia?oldid=43337"
Community content is available under CC-BY-SA unless otherwise noted.